How to handle RTS Click-And-Move in 3D Space?

How can I handle the click-and-move in a complete 3D space? It is easy to handle on a 2D plane by a simple raycast, but this is not the case in 3D since there is no end-plane for a raycast to get an end-point.

I have two ideas in mind:

What are your thoughts?

Breaking movement in two steps is an outdated approach.

Homeworld did a fine job, but mouse wheels weren't so widely deployed yet so they didn't go with that.

You can still have modifier keys to switch mouse movement between the modes but moving the mouse and scrolling can be done simultaneously thus is the most efficient method for the hardware. In homeworld you set the planes in sequence one after the other which slows you down. Not to mention you are only slowed down in moving to empty space. Moving to object automated the trajectory.

The other ways to do it simultaneously are two hands on the keyboard or twin stick controls.

If your fluidity of movement depends on speed, doing and extra step can kill your flow. Homeworld fits its system because it doesn't matter if you waste an extra second or two in issuing your move order, and you can be sure they factored that consideration when they built the pacing.

If zooming isn't a central mechanic and you don't need to keep it as robust as possible it can be offloaded.

Handle zooming the same way the original "Black and White" game did. Zoom by mouse movement + Mouse button hold (where the button is just the function modifier between map move and map zoom). The gametesters I've used all agree it "feels" to be the best zoom. I would recommend holding both mouse 1 and mouse 2 while for the zoom mode (exactly as B&W did) - but technically one of them would suffice if you don't have a conflict.

I've often recommended to people to install the game to try it. Add the keyboard usability and its the most useful and comfortable mechanic to date I've seen for large map navigation.

Now, this of course is not common default and you have to damn well make sure it is explained to your users at least a few times. But once people get it they are very comfortable with it. Besides you are teaching folks navigation in 3d. You are bound to venture out of the 2d controls comfort zone any way.

If your mouse is too overloaded with controls you can always use a modifier keyboard key or middle mouse button. Optimal configuration would really depend on your game flow.

This is similar to how Homeworld, one of the first 3D space RTS games handled movement. Works really well.

Breaking movement into two steps provides the most control, simply because the mouse is a 2D input device. It can only provide a position on one plane at a time. The same could be achieved by binding two keys on the keyboard to be the up/down in the Y axis. 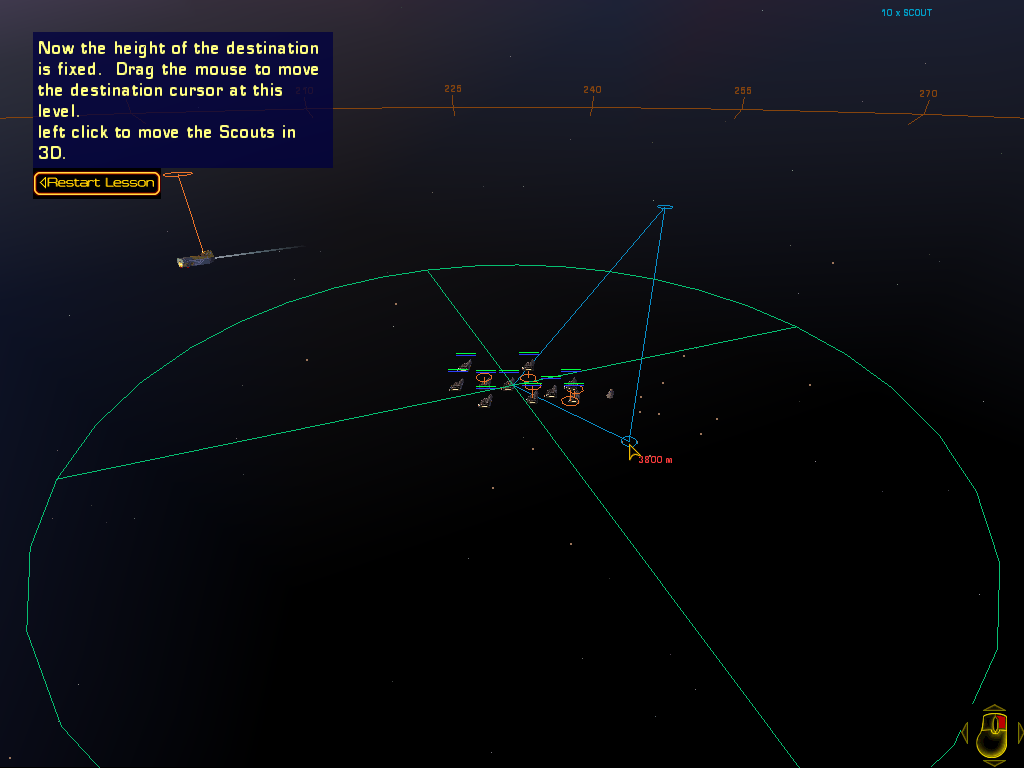 Do what EVE online does: Don't allow click-and-move! Note

What they do is that they create objects in space, and allow you to right-click on them (raycast or what-not), and select one of different options:

This allows you to only move to relevant places.

Note (They might have changed that lately, though. Haven't played for a while.)

Not the answer you're looking for? Browse other questions tagged game-design unity raycasting rts or ask your own question.

1
Unity3d select empty gameobjects in scene
0
Platformer raycast collision detection
0
Script no longer working now that it is attached to a child object. Why is this?
0
Raycast Movement on a sphere
1
How to prevent cube intersecting with other objects when moved around with mouse?
3
Simulate parallel dimensions / subspaces in Unity without colliding coordinate systems
1
Unity raycast equivalent in Unreal
2
Handling complex selection mechanics in RTS-style game