I'm making a very simple game with a sphere that's supposed to roll and bounce on "planets". Also, please be ready to read a lot. I want to be very descriptive for you. :)

I've pretty-much-done everything for the game already, except I have a problem with jumping. When I press the space bar, the sphere will hop once. But after pressing space again, it will not.

What We're Dealing With 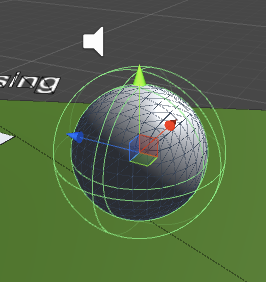 The JumpControl.cs file located on the Player_JumpBox object, takes input from the user, and controls when to jump. (Note: I did not say how to jump)

The PlayerController.cs file located on the parent Player object, controls everything about the player. It controls how to jump. (Basically has variables like jumpForce and a function that JumpControl.cs uses to tell the parent object to jump.)

(The only truly important thing is the Jump method at the bottom of PlayerController.cs)

I really just want to know why the player isn't bouncing everytime I press 'space'. It's really bam-boozled me for a while, and I really need your help.

Thanks for reading! I tried to make it easy to understand.

Silly me, I assumed I already made the Player's Rigidbody a trigger.

Also, you need to make each and every child of the planet (like the tops of the planet) that you want to let the player bounce on to be static; not just the empty object parent.

I'm very sorry I never double-checked, but I hope this helps others out.

Not the answer you're looking for? Browse other questions tagged unity c# movement jumping or ask your own question.