What is the term for a 3x3 tile set used to create larger areas?

What is the pattern/design name of using a 3x3 tileset (usually in a tiled 2D game) that can be used to create larger areas of itself. For example, these: 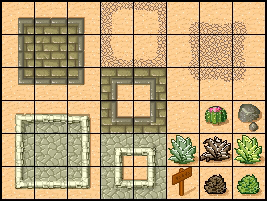 I thought it was a "9 tree" or something like that but cannot find it, it is perhaps an uncommon reference.

A name that will give you actual results in Google is 9-slice.

Another way to call it and ask Google about it is 9-patch.

As per this chat discussion, 9-pane seems to also be used, but the almighty Google will not show you what you need, unless you're into windows or something.

Thanks to Kevin and Josh in chat for that.

I'd disagree with the accepted answer here.

I'd call this an autotile, and not a 9-slice

"9-Slice" (or 9-patch) is usually used to refer to a system where the content creator slices the image along 4 lines (not necessarily equally-spaced tiles). When rendering a rectangle, the corner slices are displayed at their native size, and the edges/center are stretched (not repeated) to cover the gap.

This is the sense in which Flash, Illustrator, Unity, etc. use the term, so there seems to be good consensus that 9-slice means stretching, not repeating. This is usually used for scaling UI elements like message windows & buttons - and a Google image search turns up this usage almost exclusively. 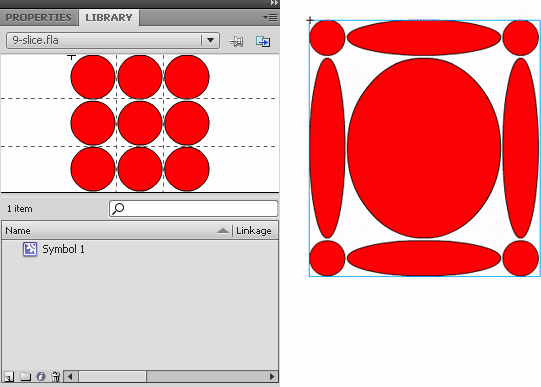 Image from the game{closure} docs on 9-slice options

The term I'm more familiar with to describe a set of tiles that can cover an area of any shape or size is "Autotile" (especially in the context of a system that works out/constructs the right tile permutation to use based on adjacency rules, so a level designer doesn't have to hand-pick each tile)

This terminology seems to have been popularized by RPGMaker, which has used a couple of variants on this idea over its generations.

An image search for autotile shows results which seem much closer to what the question describes, and other posts on GameDev.StackExchange describe this as "autotiling" as well.

Image from the docs for the Rotorz Tile System for Unity

There are some other names; Wang tiles (dominoes), aperiodic tiling

Not the answer you're looking for? Browse other questions tagged 2d tiles terminology .

7
How can I achieve smooth shading / glow from one tile to another?
3
How do you use your own tileset in Tiled?
17
Seamless tilemap rendering (borderless adjacent images)
2
Term for coordinating design elements to produce larger possibility spaces?
9
What is the origin of the term "AAA game?"
3
Create a seemless grid-based polygonal tileset
2
Civilization Style Borders With Sprites
4
Name of this technique used in games such as Minecraft or the sims
1
Term for compositing textures according to colors in an index texture mask?
4
Is there an "official" term for the "key-door problem"?