Simulation of a two-masses connected by a rod 2D system

I'm working on a multitouch-based interface and I want to add some physical behavior to gestures (pan, zoom and rotation). I thought model the system like that:

My problem comes when I have two masses (I don't need more than two masses to model this system):

The masses should act as if they were connected by a massless rod and, optional, they can slide along the rod with some coefficient of friction.

I attach a picture to explain the thing better. 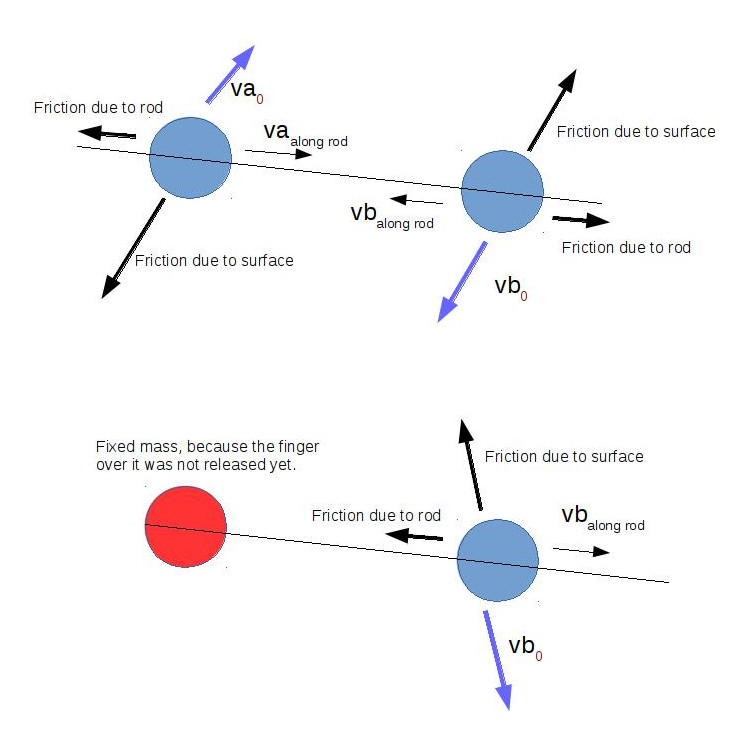 I forgot almost all the physics I knew at college and now I'm a developer.

I know that at time t the masses have a position (x, y), a velocity and one or more forces or accelerations acting on it. And I want to know those values at time t+dt.

I would like to have some advice or approach to this problem. It's not about integrators or numerical analysis. My main doubt is about the rod constraint (keep the distance between masses) and the rotation movement.

You have only four independent co-ordinates to track:

Don't attempt to analyze any forces - just use the kinematics and apply linear impulses as you have described in your posting.

In this model the constraint of the rod is implicitly enforced by having every impulse to each mass also result in an overall rotation of the system.

Not the answer you're looking for? Browse other questions tagged 2d physics simulations or ask your own question.

5
How can I implement fixed joints in a 2D physics system?
23
Optimizing gravity calculations
0
Resolving a collision between point and moving line
3
2D Physics: What happens with torque when center of mass changes?
5
calculating torque from angular momentum considering inertia moment
0
Problem resolving rotation between sphere-sphere collision
0
Object to reach height depending on its gravity and mass