I am working on playing different animation of key press.Below are the animation element attached to my player 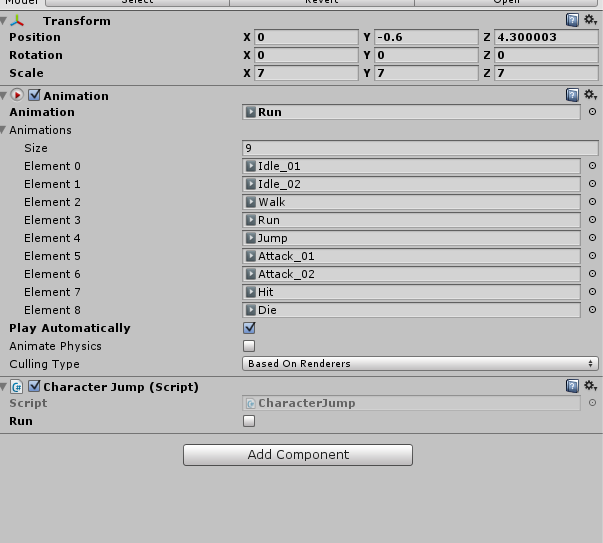 The problem is that when I press the key "Jump" animation will be played,But this animation is played again and again.

I need to play the "Jump" animation only once.Then I need to switch to run animation

Here is the code written

if you want play once Jump animation you can use Input.GetKeyUp for falsing condition.your way isn't correct because you Check condition in Update function.In update function while condition is true do your work. using UnityEngine; using System.Collections;

we can avoid it by changing that into a diffrent boolean that doesnt effect the running animation itself as I can only guess that when RUN equals TRUE the player is running so the following code should solve this problem.

There are parts of both Seyed's answer and Daniel's answer that are correct.

However, I would advocate for different code.

For example, Daniel does this:

Which doesn't fix the issue that run will be true forever (the identified problem). All it does is make the effects of that no longer dependent on it.

Instead, I would suggest this:

Which makes the scope of run function scope rather than class scope (which lets it reset) or use an else statement that resets it, or remove it entirely (as doing it purely based on the input is fine, just that the field is no longer relevant). What you do depends on whether or not you're accessing that field from outside the class or in another method.

Then, both Daniel and Seyed are still using Input.GetKey(KeyCode.R), which means that the key is not rebindable and if you ever decide that "You know what, I don't want Run to be R, I want it to be Left Shift" you have to change it inside your code anywhere and everywhere you're using KeyCode.R.

Instead use Input.GetButton("Run") and use the input settings (Edit -> Project Settings -> Input) menu to configure your keyboard input. Alternatively you can get an asset like Rewired that allows you to do key rebinding in game rather than Unity's setup which prompts the user before the game and looks wholly unprofessional (and it only works for Windows and Mac builds, webgl and console builds won't show it and your keybinds are again permanent).

Not the answer you're looking for? Browse other questions tagged c# animation unity or ask your own question.

0
Unity3D animation trigger reset
3
Control animation using animator control class
0
unity animation won't play unless input key is held
0
Unity 5 Animation attaching
0
Need Help With My Script And Animator. I am encountering a few bugs with it
0
Play animation with the help of the animator once, wait until it ends playing and continue script code
0
Animation is delayed after few play attemps even though all transition times' are zero