Raycast will not hit generated box colliders at initialization

In my map class I have an algorithm that is generating and merging box colliders together. These belong to the layer "Ground".

After that, in some places on my map I'm generating some new cubes on-the-fly, and some of these cubes I don't want to generate at all. So, I'm doing a raycast to determine if they should be added or not.

I'm doing these raycasts to check if the position they should be generated at have free space to the left and right. For both rays I'm checking if they hit a collider beloning to the layer "Ground".

I've tried to create two cubes in the editor and assign them to the layer "Ground". If I run the game then I get a hit between these two cubes. But I will never get a hit checking against my generated colliders.

I do this logic in the Start-method, is there any certain method in the life cycle when I can start to use my generated box colliders?

Assuming you're trying to coordinate the Start() method of various scripts, you can ensure they execute in the order you want by going into the menu at Edit > Project Settings > Script Execution Order.

Just make sure your box collider script is running before the raycast script and you should be good to go! 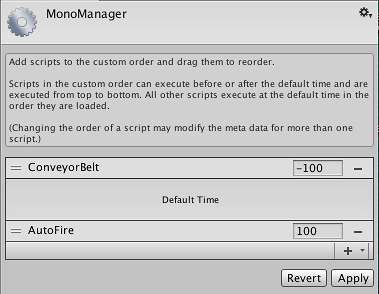 Scripts can be added to the inspector using the Plus “+” button and dragged to change their relative order. Note that it is possible to drag a script either above or below the Default Time bar; those above will execute ahead of the default time while those below will execute after. The ordering of scripts in the dialog from top to bottom determines their execution order. All scripts not in the dialog execute in the default time slot in arbitrary order.

The numbers shown for each script are the values the scripts are actually ordered by. When a script is dragged to a new position, the number for the script is automatically changed accordingly. When a number is changed, either manually or automatically, it changes the meta file for that script. For this reason it’s best if as few of the numbers as possible change when the order is changed. This is why, when possible, only the script that is dragged has its number changed, rather than assigning new numbers to all the scripts.

I had the same problem with a character collider; it used to miss collisions with objects. I found out that it was caused by a bug that has not been fixed, as of Unity 5.5.

The fix was simple. I added a capsule collider, and continuously checked for collision using OnTriggerStay().

Not the answer you're looking for? Browse other questions tagged unity collision-detection raycasting or ask your own question.

0
onCollisionEnter2D not behaving as expected
3
Why does Physics2D.Raycast automatically fail if applying a layer mask?
2
Alternatives to raycasts in unity?
1
How to find the closest point on multiple colliders within a box?
1
How can I convert Physics2D.Raycast to Physics2D.BoxCast to yield the same results?
0
How to run code selectively only when a specific trigger collider has been hit
0
Raycast2D hits acting (seemingly) inconsistently
1
How can I access the normal map value in Unity?