So I was trying to make a UI element to keep score in a unity (4.6) project and I'm having trouble assigning the 'Text' element to the Text variable.

So I have the text element with the script attached to it. At the moment the script is empty except from some variables being created, here it is:

In the unity UI the Text variable shows but it is empty, and it will not let me drag the 'Text' object from the hierarchy into the variable box. It shows the outline like its going to accept it but remaing 'None (Text)' when I release the click. I tried importing an already working UI from another project into this but when I added it to the hierarchy it removed the text element again (just for reference the text worked perfectly in the other project).

Also a screenshot of the hierarch just in case: 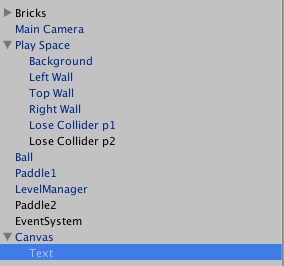 Is there a problem with the scipt or the prject or have I messed something else up?

Clicking the circle next to the text variable brings up the window to select the element. Mine shows up without anything in it. I expect it to show the text object I have made.

So long as your 'Text' object contains a Text component, this will work as expected. 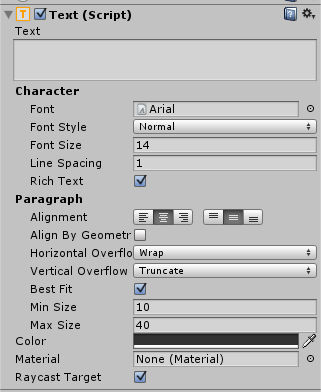 You may have replaced the Text component with your TextController script, or it was removed some other way.

Alternatively, you could change your script as follows:

Not the answer you're looking for? Browse other questions tagged unity c# gui or ask your own question.

4
I can't drag'n'drop UI-Elements from the Scene-hierarchy into a public field (Unity 5)
2
Unity associated game object is null when running
0
Click event doesn't trigger when clicking
0
Anchored Unity text …not anchoring!
1
How to completely stop the camera from clipping into the ground