How to Ignore Raycast for Boxcollider2D by layer or boolean?

Is it possible to add boolean to the BoxCollider2D component, to identify raycast targets? I want to make it similar to the Image component. 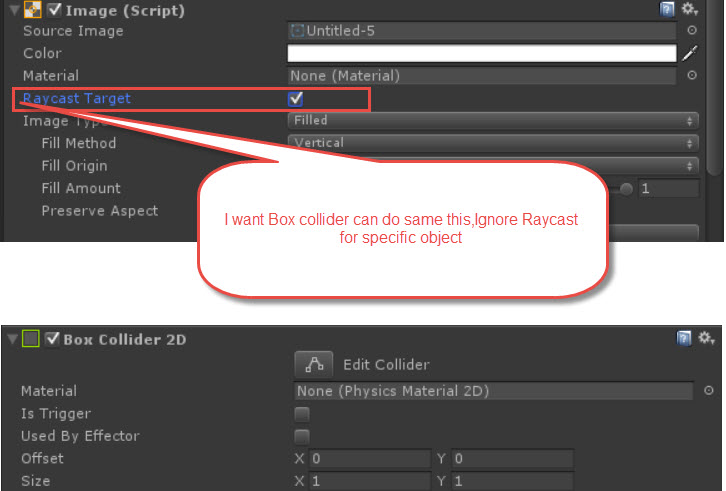 My problem is that when several objects overlap, I need some of the objects to ignore the raycast.

I can't use Queries Hit Trigger or disable the collider component, because I need them to enter the OnCollisionEnter and OnTriggerEnter methods.

Here is my Update method:

If you cannot accomplish what you want with Layer Masking, or with the Collision Matrix, then I can suggest an alternative approach to the problem.

You can put a tag on the collider objects you want to avoid raycasting, and then doing something like this:

However, if you want similar behavior as described above, you may want to consider extending the main MonoBehaviour class into a custom one that you will derive all of your Collidable objects from.

Then, deriving from this class, instead of directly to MonoBehaviour will expose a new property entitled IgnoreRaycast, to all of your GameObjects.

Unfortunately, it doesn't just ignore ray So your update loop would then look like this:

Your problem appears to be in your understanding of what your actually trying to do. As such, I can identify two seperate questions. I will answer both, in case it provides more context. Ultimately, you would benefit greatly from using layers to selectively ignore raycasts.

How do I ignore raycasts for specific objects?

With layers. Let's take a look at the API reference:

The layerMask can be used to detect objects selectively only on certain layers (this allows you to apply the detection only to enemy characters, for example).

This very clearly points to two ways we can filter game objects, when we raycast; by layer mask and by depth.

Layer mask is good when you know what your looking for. Put simply, your raycast will only hit objects that use the same layer as layerMask. By default, layerMask = DefaultRaycastLayers, so your raycast will normally hit all objects that use the default raycast layers. Assuming you were looking for a particular object, you would ensure that object had a unique tag, and specifically use that tag as your layerMask parameter.

If you use a layer mask, your raycast will only hit objects that use the same layer. This is case-sensitive, so ensure that you use correct capitalisation.

Depth is good when you do not necessarily know what object your looking for, but know roughly which physical layer it should be in. Filtering by depth requires a bit of pre-plan, but it does allow a bit more diversity in what you are looking for.

Simply put, you would ensure that you ordered your game objects along the z-Axis in order to categorise them for particular interactions. For example, if your floor is at a z-Axis of -1, and your enemies are at a z-Axis of 1, you could use a depth of minDepth = -1, maxDepth = -1. If your enemies were anywhere between 1 and 10, along the z-Axis, you could specifically target them with a depth of minDepth = 1, maxDepth = 10.

It is important to remember that the z-Axis is not considered, when applying general collision and physics in 2D. As such, you can use the z-Axis to layer your objects, without interrupting normal collision you would expect from them.

There are going to be times where you will still want to look through the array, returned by RaycastAll(), both to provide extended filtering and to ensure that you have actually retrieved the intended game object.

Is it possible to add boolean to the BoxCollider2D component, to identify raycast targets?

Not that I am aware of; but it appears your reasoning may be based off an incorrect assumption.

Firstly, BoxCollider2D is a sealed class. This means that we can not inherit from it, which would be required to add our own elements.

Secondly, the boolean in question does not allow you to ignore raycasts from specific objects. It only allows you to ignore raycasts completely. Enabling RaycastTarget simply allows the image to react to ray-casts. Anything you would want from this behavior can be replicated by accessing and disabling/enabling the collider. You have previously stated that this is not going to work for you, but regardless, it is a good comparison of behavior.

Not the answer you're looking for? Browse other questions tagged c# unity raycasting or ask your own question.

0
How can I raycast between two moving objects in Unity?
1
Unity - Raycast not hitting to BoxCollider2D objects
3
Unity C# - Raycasts, How to Ignore Triggers?
3
Why is Raycast hitting masked layer?
0
Raycast does not detect child layer if parent layer is set to ignore
0
RayCast seems to ignore some objects?
0
How to raycast in MonoGame 2D?
0
How to raycast from a UI element