What is the velocity of a translating projectile in 2D?

What I'm trying to do.

So I want to have a projectile that starts at point (x1, y1) and head in the direction of my mouse say point (x2, y2).

To clarify I'm pretty sure it's a vector but I don't know much about them.

I'm making the game in Java and LibGDX so Java.MathUtils would come in to play i'm pretty sure. If anyone that can answer don't know these languages, psuedocode will be just fine.

How I've tried it

I'm pretty sure the formula is something alongs the lines of velX := cos(radians) * speed velY := sin(raidans) * speed

And radians starts out as Pi/2 though the tutorial was pretty rough.

Then it would be x += velx * deltatime and same with y.

Can anyone help me out with the translation formula

You need to learn a little bit more about vectors but I'm going to explain it anyways.

First of all, let's say that your 'game unit' is in pixels and that points (coordinates) and vectors have two components x and y.

To get the vector between A and B, you have to do the following formula: V = B - A. Since B and A have two components, we can translate this into V = (xB-xA, yB-yA)

However, this vector is pretty much useless because the length of it is the length of the line between A and B. If you have something like this

The idea here is to get a direction from your projectile (point A) to your mouse or whatever object (point B). 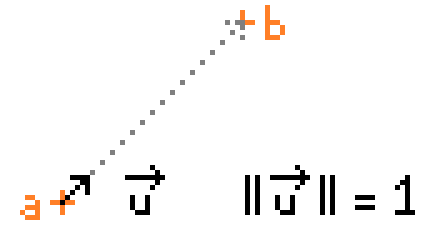 This procedure is normalizing where you just get the direction of a vector and completely ignore its length (sometimes called 'magnitude').

Adding this vector u to your position will move your object 1 unit away from its current position.

The point of it ? Moving your projectile towards a point with a fixed 'speed', like this:

this code will move your projectile 10 units (let's say pixels) towards your mouse.

EDIT: Note that with this method you don't need to use trigonometry to compute the normalized vector; that means that neither you have precision loss (floats, pi, ...) nor confusing conversions with radians. That's a win :)

EDIT2: For consistence and clarity, I used the word vector and position but these "concepts" are the same: a point has an X and Y component as well as a vector.

In the code you would use the same data structure. Unfortunately I don't know java but I can provide you a c++ example:

Here MyData is a structure that allows two components: x and y. This structure is used for points as well as vectors; eg:

In C++ there is a concept (operator overloading) that makes you able to perform custom operations between data structures (such as point_b - point_a in the above example). This is really useful because the program won't know how to subtract two "MyData" together unless you write your own method.

I don't think Java enables you to do this "hack", so instead of

this is what I meant where I directly used "pos" without the associated component.

NB: Usually the MyData data structure is, by "convention" called a Vector2 in 2D, Vector3 in 3D etc...

To get from point A to point B where both A and B are vectors, the direction is the vector normalize(B - A), lets call it C. The velocity you're looking for is the direction-vector C times the speed in units per second.

So if A is your actual position, B is your target position, 10 is the speed in units per second and delta is your deltatime, then your velocity is velocity = normalize(B - A) * 10; and your new position is A + velocity * delta.

Not the answer you're looking for? Browse other questions tagged java libgdx mathematics or ask your own question.

0
How to normalize angles from points in java

14
Get angle in radians given a point on a circle
3
Precalculate the position of a rotating Aircraft
0
Rotating one object to track another in worldspace
40
Why are radians preferred over degrees in game development?
0
How to move dashes towards target?
3
How to create a projectile motion of a cannonball in top down view?
0
Finding distances between sprites in an array
1
Counting down a number of coins in the same total time duration, no matter the amount
2
Calculating the difference between two numbers using exponential growth
0
Rotate relative to set point in a specified direction in a 3D space