I am new to unity. I am trying to assemble a character that walks forward, stops, and walks forward again when I maneuver the joystick (ps4 controller) accordingly.

I have the whole thing pretty much set up...

However, my animations broke at some point. Initially, when I added the animations to my character, the character moved with the animation according to the motion encoded in the animations (all of which were auto-rigged at Mixamo...so I am almost certain the bug is downstream in something I did or enabled somehow).

I have disabled all scripts...so have I somehow broken the animations...??? Re-Importing the animations does not fix them either.

Here are the images of my character settings, then the controller, and then an animation clip which shows the character moving forward in the sub-clip and where motion information is clearly present... 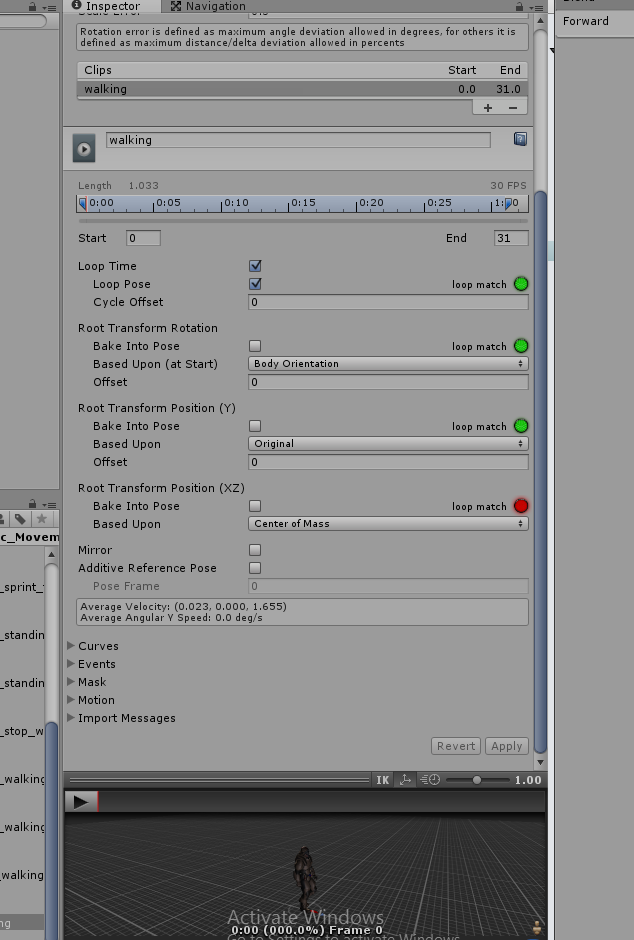 The problem is caused by: Apply Root Motion unchecked in the animator and "Loop pose" checked on the animation inspector. Which is a setting best suited when you move your character programatically, but it is then harder to get the natural foot cycle.

The problem here is that the animation has it's position set to somewhere around (0,0,0). So, whenever you run the animation, the position is set to 0 (about). I have had this problem in the past, but the way I solved it was by making it a parent of a GameObject. The animation runs on the child, and the movement is run on the parent.

Note: You could switch the child and parent around.

Not the answer you're looking for? Browse other questions tagged animation unity .