Autonomous robot - moving from 1 object to the next object

I have a 3D model of a house; a first-person camera with movement through the house; a robot that autonomously moves.

I want the autonomously moving robot to search the house for certain objects. I have placed 4 guns (same model) in the house.

This is the code I have now. This works for 1 gun; not multiple game objects:

What I want - extra

For that, I used the following code for the player:

And the same for the robot (but changed accordingly).

I will be honest with you that I have very little understanding of programming or Unity. I want you to know I've been looking for an answer for many hours but even though the idea might be too complicated for me just yet, I still hope you can (and want) to help me :)

To solve all of this problems you still have to write quite a lot of code. So this answer is just a general overview of what you need to do, not a complete implementation. When you need specific help with one of these points, feel free to ask it as a new question.

You don't need to add the Guns via the inspector one by one. Just execute FindObjectsOfType at the start of your game:

What do you mean by "talking to the player"?
You could make a GUI for that:

Set up the OK-Button to close (hide) the Message: 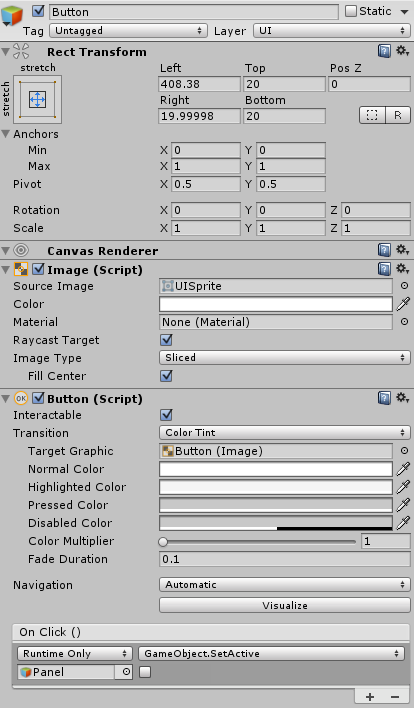 ...and now you'll just have to add a little bit of code to the robot:

Assign the two variables via the inspector and now the robot can show a text-message to the player by calling the showMessageToPlayer-method.

Not the answer you're looking for? Browse other questions tagged unity c# 3d movement scripting or ask your own question.

0
Moving autonomous robot form one location to another based on array
0
Making a gameobject move back and forth in Unity
1
How can i make fade in/out of the alpha color of a material from black to none black?
0
Player tag does not respond to AddForce
0
Why when drawing a box using LineRenderer the connected points of the lines is not complete?
0
How to parent object to empty when looked at
1
How to completely stop the camera from clipping into the ground
0
Player light color he collects before checkpoint is getting reset when he restarts at checkpoint