How to generate a city street network?

I would like to create a city generator for a game, but I am facing a problem at the very start of the generation: the road system.

As it is a medieval world, I don't want a grid plan like many modern cities. I would ideally prefer a pseudo-random generation of large avenues and smaller streets, where it could be possible to get lost, but with still some logic - not a complete labyrinth.
Something that would look like a naturally grown town.

In order to keep it simple, let's say my cities would be on flat and stable terrains, without any river-crossing or relief problems. I could try to integrate it to a solution after.

I didn't decide of a precise size or disposition for my cities, so if you have a solution that would work only with cities of a precise form (square, circle, rectangle etc), I would take it.

A good place to start with procedural city generation is Parish and Müller's Procedural Modeling of Cities. Their paper presents an L-System in which rules concerning population density & road patterns (rectangular grid, radial & least elevation change) are combined and then fixed to accommodate local constraints such as water fronts & road aesthetics. While the results of this system are impressive, it has been criticized as being unnecessarily complicated. Barrett's alternative solution is restated in Rudzicz's Spare Parts dev blog as follows:

This approach removes most of the symbol rewrite housekeeping inherit in Parish and Müller's L-System. You can see an demo of this approach here.

A benefit of this approach is that it is city shape agnostic - you can add outline constraints as needed, so your city shape can be determined by your game design needs rather than the algorithm. Depending on your city size, this might be good enough as is. Here's a result from the above demo with a segment limit of 100:

But if you need something big, you may have trouble; here's a result with a segment limit of 500: 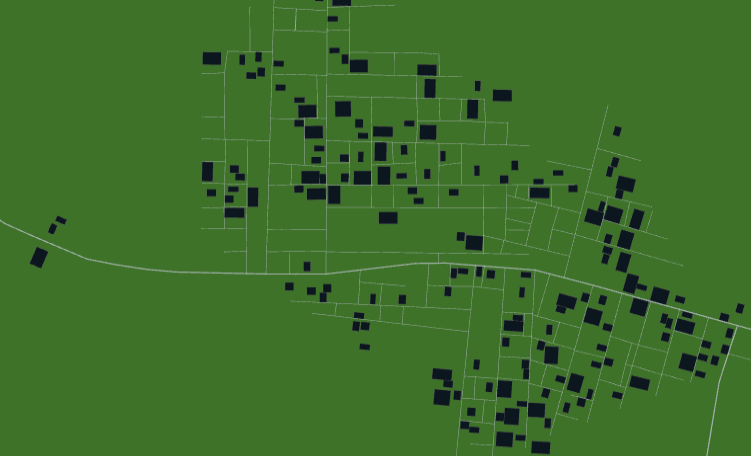 In part, you can adjust this by changing the road branching rules, avoiding 90 degree angles, etc. If your layout is still too regular, here's my correction:

Transform your city grid into a graph where each street is an edge & each intersection is a node. Next, use whatever algorithm you prefer to convert the graph into a maze. Here's the last example turned into a maze: 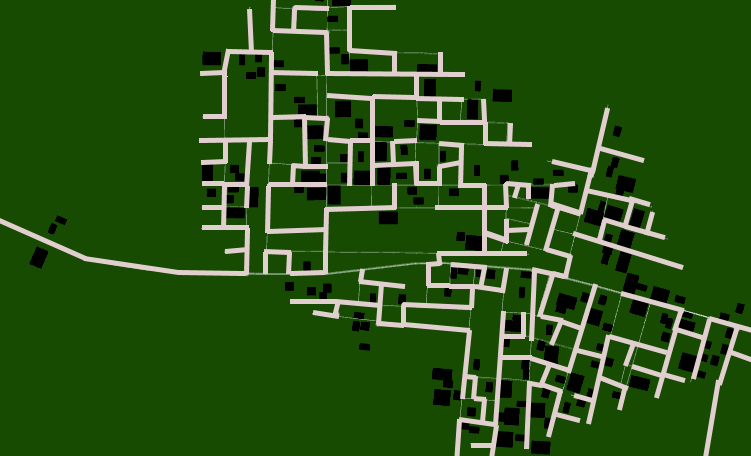 Now the output has the opposite problem, it's too maze like. But now we can apply a couple of techniques from the Secret Workings of Jamis Buck's Dungeon Generator. First, increase the sparseness by removing some dead end corridors. Next, increase the connectivity by adding in roads that create loops (i.e. introduce cycles to the graph). Here's an example result: 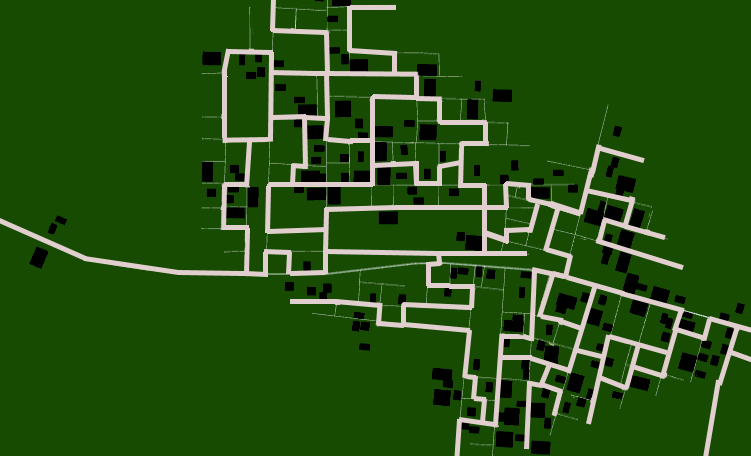 Note: it is possible to achieve the same final result directly from the earlier grid oriented layout stage (before generating the maze), by only apply edge removals to the city grid. The problem with that approach is you must ensure removing an edge doesn't partition the city thereby making portions unreachable.

If you look for medieval/old city plans on Google you'll find many different variations, mostly based on city origins (e.g. random settlement vs. organized military position).

I assume you're looking for a more naturally grown/chaotic settlement.

First of all, there are loooooot of ways to do procedural generation and none of them is easy at all, i will make kind of approach to how you could make it work, is up to you take it, modify it or discard it.

Will pseudo-code in JS as it's easier to understand.

1º define an entry point, as you want to build a medieval city we gonna start with a square, so lets say your town will have 300 squared units and the square will be in the middle of it (represented with an X).

2º now we will the avenues, there will be a random number of them, they will be straight and will start from the middle square or from other avenues

This should give you a square and couple main streets

Now we have to set the avenues that doesn't start in the main square, they will intersect the other avenues

To get perpendicular vectors you have to swap the x,y cords and negate the new y:

Right now you should have something similar to this, doesnt it look like a town? :P

3º now you only have to interconnect the avenues with short streets, also, you could spawn random squares all along the town and make the same as above for all of them, or just spawn small streets from some secundary squares, it's up to you.

Remember, the shortest your streets are, the chaotic the town looks like.

9
Town generation algorithms
0
How big can a background file in Unity be?

37
Procedural world generation oriented on gameplay features
2
Procedurally Generated Structures over large quantitys of chunks in 3D Terrain Generator
4
How can I generate biome borders?
7
City-region generation
1
How can I randomly generate achievements?
2
How to generate a 2D tile planet with perlin noise?
7
How to automatically generate (creative) names for stuff?
0
How to generate smoother Perlin Noise?
6
How does Terraria generate such large worlds initially?