Adding a Scriptable Object to the Scene

I've also added a public GameObject weaponObject; so that I can drag and drop the 3D model related to this weapon.

Since Scriptable Objects cannot be added in a scene, how can I add a GameObject in the scene with an attached script that will draw data from the NewWeapon.asset and display the 3DModel already specified and load up the rest of the variables?

My goal is to create a script Item.cs which will be attached to a GameObject in the scene and then based on the current ScriptableObject load its name, stats and 3Dmodel

ScriptableObjects are not components, so you can't add them with "Add Component". But they can be properties of components.

A GameObject with that component in the editor: 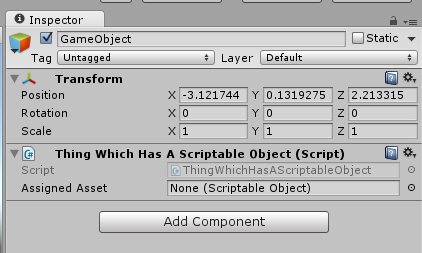 You can now drag your NewWeapon.asset into the "Assigned Asset" slot and then interact with it from the ThingWhichHasAScriptableObject script.

0
Adding a function call to a prefabbed button in Unity
0
How to set material to gameobject dynamically using c# script in unity?
0
How to do camera follow without drag and drop in Inspector in Unity?
0
Offscreen arrow indicator appears only when the user go near to the object
0
How to detect collision in C# script not attached to any game object
0
pass by reference a transformation
1
Which is better practice in Unity? GetComponent<>() or making the variable public?
0
How to change a variable in the spawnpoint from another prefab