I'm currently trying to achieve a sort of flashlight effect in GLSL. I only want to draw textures within a certain distance of a specified point (the mouse position, for example). Here's a quick example drawing of the effect I wish to achieve: 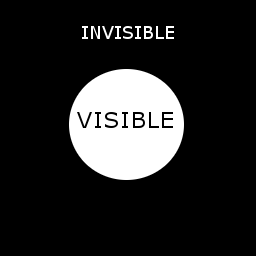 I've successfully created a shader that checks the position from a certain point to the position of the fragment, and then discards the fragment if the distance is larger than the specified light radius. The frag shader looks like this:

The problem with this shader is that the visible area isn't a circle, it's an elipse. This is obviously because the screen aspect ratio is not 1:1. I've tried multiplying the Y values of all of the position variables with a resolution uniform, but it still remains an elipse.

My other problem is that I wish to have smooth edges on my visible area. I've read up some on the subject and I see that you can use mix and/or smoothstep to achieve this, but I'm unsure on how to implement it.

Anyone got any suggestions?

To fix the aspect ratio (and speed up the shader a bit):

To get a smooth edge remove the if(...)discard and add at the end:

For a less perfect but faster version:

You can add back if(outColor.a <= 0) discard; at the very end to eliminate transparent pixels.

Not the answer you're looking for? Browse other questions tagged libgdx shaders glsl lwjgl fragment-shader .