I'm using a custom particle system for my LibGDX / Java based game project (because I used Slick2D earlier on, need more parameters so I made my own and then ported). The system is fairly standard as far as I'm concerned, uses particle pooling (each emitter has its own fixed size particle pool) and renders each particle in a batch and uses one single (2048x1028) packed texture with all particle textures on it. Here is how I render the particles in semi-pseudo-code (because the entire code isn't relevant):

Now for some reason with only around 300 particles (split up into 10 emitters with varying sizes) the performance drops to awful ~30FPS on my notebook's integrated GPU (Intel HD 4400) when I need / want 60FPS at all times. I know iGPUs aren't great, but that one is one of the better ones out there and games like Ori or Braid which have thousands of similar particles run without any problems at 60FPS on that very chip. I also doubt (and hope) that it's not just Java vs C++ which is causing this huge performance drop here.

The in-game profiling data however shows a few things: Particles aren't really taking that long to render and there is a lot of idle time. To me, that doesn't really make much sense. It looks like there would be enough resources to easily render everything at 200FPS or more, but it is stuck at a horrible 30FPS.

There are a lot of things I already tried that didn't help:

For the record, here's a VisualVM CPU sample over a timespan of 2 minutes: 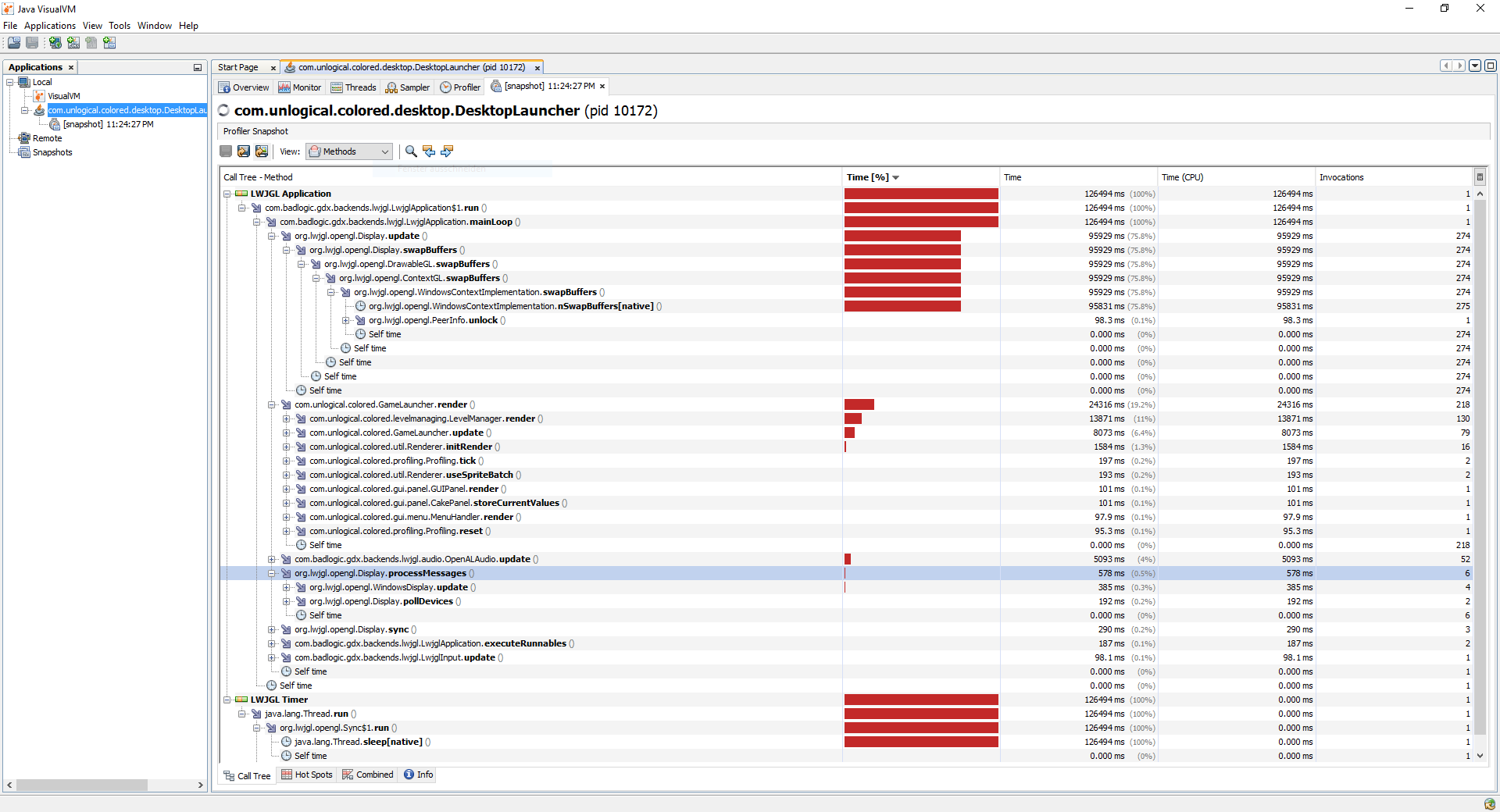 There must be something I'm doing wrong and I also want / need more particles than just 300 so I definitely have to fix this - but I don't know how.

I forgot to turn off MSAA. I had it running at 2x sampling rate for smoother antialising, I completely forgot to check for that. In the meantime I improved performance in a lot of other parts, but that's what finally did it.

I would take a look at glDraw*Instances (Instancing) Also, reducing vertex count for a large amount of small particles is extremely important. I don't know if your using a model or a single 2D texture or what, but some general tips:

Use as few verticies as possible.

If using transparency in your textures, use glAlphaFunc to reduce blending needed.

If using textures, keep batching them, and definitely use VAO's if your not already.

A nice approach I've seen is to have a single 2D texture for particles, and have it face the camera. Minecraft uses this for some particles.

I could say more, but I don't see your rendering code above.

Dont know how your particle system is written but it is very possible that your bottle neck is the communication time between CPU and GPU. Not going to go into too much detail but just know that this operation can be very slow because it causes stalling. Perhaps the idle time you see in profiling is due to that.

What a good particle system do is to move all the particle movement calculation to the GPU so that CPU only need to communicate with GPU when a particle is spawned and when a particle needs to be destroyed.

Not the answer you're looking for? Browse other questions tagged opengl java libgdx particles .

1
How should I design my particle system to make it easy to add new particle effect types?
10
Is it worthwhile to use particle pools in managed languages?
5
Alternatives to multiple sprite batches for achieving 2D particle system depth
2
Particle systems on multiplayer games
0
Slick2D re-starting particle system/emitter
0
Efficiently drawing large numbers of small, moving squares to screen in libgdx
1
What is the connection between these LibGDX concepts?
0
OpenGL C++ Drawing particles instanced performance
0
Performance issue when particle system occupies most part of the screen