I tried for several days to solve my problem , but in the end I just gave up and I decided to ask , since the solution is beyond my knowledge

I'm writing a 2d top-down game, in order to simulate the heigth of an object i use a third axis (the image below make a better idea) , and i stucked while writing an AI for an enemy

This enemy, which is located over an A point, must jump over a B point, and the duration of the jump must be T seconds, my problem is how to find the velocity to apply in order to obtain the jump that i want 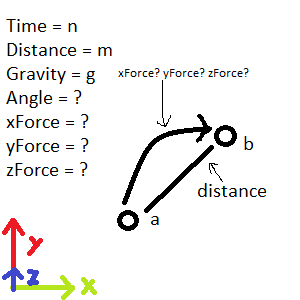 The image may be not clear but the 'height' axis is the z, while the x and the y are the standard axis of a cartesian diagram

This is the part of the code of the enemy where the jump start, then where forces are computed:

I obtain the direction in radians, if the enemy has simply to walk towards the point b this works

The following method is called in order to start the jump, then every frame the movement of the enemy is updated with this:

I omit several parts of code, for example the part where i stop the forces where floor is again touched

So the main question are:

This answer isn't my case since it describes in a different context of 2D, my jump should affect 3 axis

You can try some some physic's projectile motion:

From the horizontal displacement the maximum distance of projectile:

then you can get the x y and z component of V0 using theta and the ab vector.

Not the answer you're looking for? Browse other questions tagged physics jumping or ask your own question.

2
How to obtain “gravity” and “initial impulse” given “desired time to reach max height” and “desired max height”?

2
Smooth vector based jump
7
Jump handling and gravity
2
How to obtain “gravity” and “initial impulse” given “desired time to reach max height” and “desired max height”?
10
Can I jump from A to B?
2
How do I set the Jump distance and height of my sprite in C#
0
How do you time jump animation with uneven landing surface?