Could triangles be used for swept-AABB checks between positions?

I'm trying to understand swept-AABB collision detection. When checking for collisions between two positions of an object, I commonly see one of 3 strategies used:

A solution I've not seen discussed is just to use 2 triangles.

Here's how they compare: 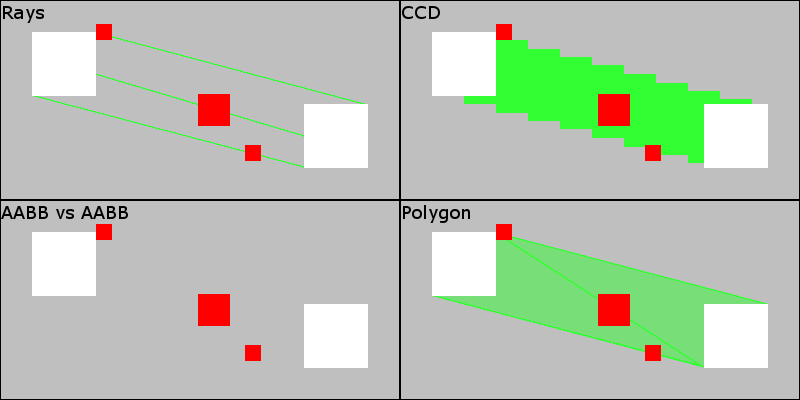 The math wouldn't change even if you started using OBBs or convex shapes with more vertices: you still just need 2 triangles.

The above image illustrates the shortcomings of each approach. Only the Polygon conversion test is sure to catch all of the swept region.

From the tests I have done, simple triangle collision in not that costly, though slower than AABB–AABB and sphere–sphere. It seems to cost less than CCD also, but avoids misses (e.g. CCD might miss the red cube in the top left). Rays have a tendency to miss small objects if you imagine moving one of the red cubes up or down in the image.

Are there issues with this technique that would cause it to be used so little?

Yes, your technique would work. It looks like a certain implementation of the convex hull technique, where you construct a convex hull describing the movement, and detect collisions by checking the overlap of those convex hulls with each other. Depending on implementation details, your technique could be faster or slower - note that your triangles technique has two redundant diagonal edge tests, which could be made faster by converting the two triangles into a single quad.

But there are other techniques, including spacial partitioning, Minkowski, and all sorts of variations under the bounding volume family (which includes everything from bounding spheres, AABB, down to convex hull).

One disadvantage with many of these techniques, including yours, is that it does not give the time and location of the collision. CCD does, so does transforming into a ray-volume test.

Continuous Collision Detection (CCD) and Ray Casting provide a specific time of impact (TOI). However using two AABBs and two triangles to create the 'hexagon' that covers all locations of the AABB's travel, you would only know whether TRUE/FALSE an intersection occurred - this isn't as useful when dealing with 'swept AABB' detection.

Even with the images if you have a box in the middle of your two triangles is true that the triangles will detect the hit as true but they cannot tell you which edge hit first or when along the swept aabb it occured.

Not the answer you're looking for? Browse other questions tagged collision-detection geometry aabb or ask your own question.

2
How to handle 3D collisions using raycasting (with a reflection vector?)
1
AABB swept collision response with voxel world
2
How do I deal with AABB sweep ghost collisions?
1
Swept AABB Collision and Response Problems
1
Detecting collisions between orbiting objects in 2D
0
Why aren't the Physics2D.Raycasts reliably colliding with the 2D Box Collider walls?
3
Swept AABB Collision Detection Conflict with Tile-sized Gaps
0
Swept 3d capsule intersection with AABB, what am I actually supposed to use to accomplish this?