How to get the closest "visible" object from my "player"?

I'm using Unity 3d and i have to accomplish the following task: get the closest "visible" object to my player in forward direction.

It is a sort of radar.

I don't know where to start. Any advice is welcomed.

Assuming that you're making a 3D game, you can use Physics.OverlapSphere to get a an array of Colliders that are within a certain range of the player. To check if the object is "visible" to the player, you could simply call Physics.Raycast in the direction of the object(s) returned by OverlapSphere and check if nothing that isn't the object you're checking for blocks the raycast. Here's a code example:

Disclaimer: I am not able to check and see if this code works properly, or if it performs at an ideal rate. If there is an issue, just mention it and I'll see what I can do.

You can use the dot product trick to get a list of instances actually visible by the player (thus lying inside the camera frustum), and check for the distance from your camera object to get the closest one.

First, you can test a certain number of instances so that their distance is low enough for them to be considered "near" the camera (or the player). Instead of testing every object, which can be overkill for your game performance, you can consider a volume around the camera (a sphere, for example) and test only object inside this space partition. The number of instances to work with is now lower, and more tests can be performed.

In mathematics, the dot product of two vectors gives as result a scalar number, which represents the projection of vector v1 upon vector v2. The length of projection depends on the cosine function of the angle between the two vectors. We can see it the other way: given two vectors, if their dot product is a value k, then their mutual orientation in the space (or plane, or any n-dimensional system) is such that the angle between them has a cosine value cos(θ) = k. So, the angle is θ = arccos(k).

If your camera has a FOV angle ranges from -β to β, assuming angle 0° is in front of the camera and that the frustum is just a cone, if θ is either lower than -β or greater than β, your object is out of sight. 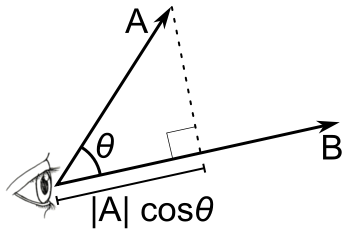 This said, you consider two vectors, A and B. Vector A is the relative position of an object, and B is the "front" vector of the camera. If the dot product of A and B is lower than or equal to the cosine of β, such object is potentially visible to the player. Otherwise, its position is away from the sight cone.

The final step is to search the list of remaining objects to find the one whose distance is lowest among all. Here's your closest, visible object to focus your attention on!

To sum up: consider a list of candidate object, so that every object is closer than a certain distance from camera. Help comes from space volume instead of checking every single instance. Then, compute dot product of those instances, to get a list of only instances lying in front of the camera. Finally, look for the closest one.

Typically, to get the closest object from the player, you do something like this (generic pseudo-code):

To find all the game objects, you can take a look here.

As mentioned in the comments you probably want a Raycast.

An example of how to implement a forward-facing raycast in a Fixed Update cycle is spelled out exactly in the Unity Scripting API Documentation here. This will return true if the raycast strikes a collider in front of whatever object you attach the script to.

From the documentation above:

After that, to return the object you strike with your raycast, you use a Raycast.Hit to get the transform of whatever you're hitting. We do this because the transform has a variable of gameObject. SO:

Full disclosure: I'm at work and can't test this code, but it should be approximately what you need.

6
Selecting all GameObjects in Unity
0
How to search for a visible player?

5
Points on lines where the two lines are the closest together
9
Rotate object to face player
15
How could I constrain player movement to the surface of a 3D object using Unity?
0
How to search for a visible player?
0
How to export from Blender to unity3d
1
Unity - Proper rotation of object from 3 points in space
0
How can I build a virtual barrier to block and prevent from the player to keep moving forward?
0
How to get area of grids?
0
How can I make an object follow behind the player with respect to its rotation such that the player never faces it and always remains behind them?