Locust Swarm algorithm for path finding (devour and move on)

I need to model a locust swarm that devour food stacks and move on to next stacks. I searched for articles and found few articles. These papers is about optimization applications but I want to convert it to a path finding algorithm to reach multiple targets (like randomly seeded many food stack). Swarm should split when food stack is not enough to feed them( multiple objective problem). How can I do this? 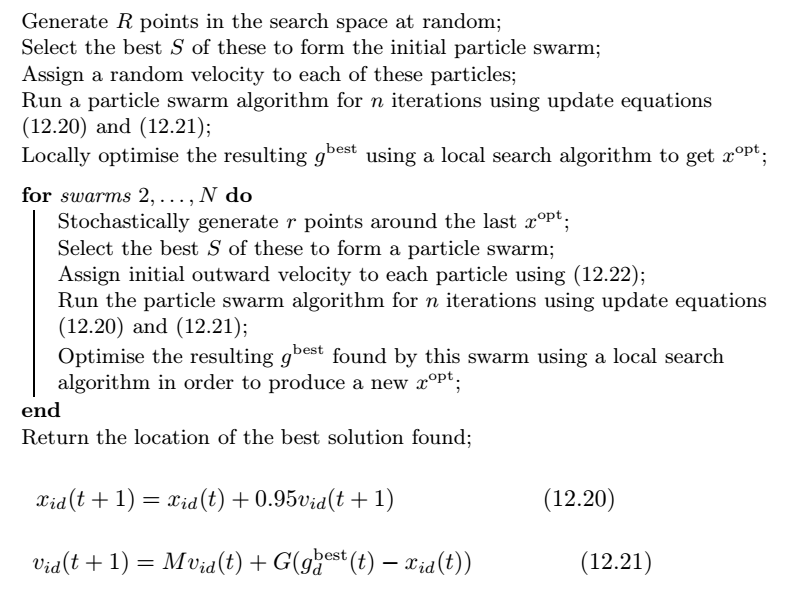 Is this what you want?

As for finding the closest food stack, calculating the center of the swarm and using a simple A* algorithm to search all other food stack from the lowest minimum distance to the highest works, or even just a lookup table to map food stacks with their nearest neighbours (Only works if your food stacks are static and regrow).

To further answer the question:

The above solution might or might not work based on the new requirements stated in the comments. Or rather, it works, but becomes quite a heavy computation quite quickly.

You can assign N swarm members to stay at the food stack, and let the rest search for another stack. However, I would predict that the swarm members would spread out quite quickly, to the point where individual swarm members are searching for stacks. The Goal-Based Vector Field Pathfinding can handle that, but the A* might suffer.

If you want to take this aproach, you should really create a lookup table, or assign a array with the closest M stacks (Where M is some constant) to a field (so for each path-finding node in the world), which would use up a lot of memory.

Assigning swarm members to swarms might also help (Where every swarm gets a food stack assigned). This way the A* algorithm can operate on N members at once, as long as no member made it to the stack you can just make all members move in the same direction.

You can of course just create a vector field for every food stack with a weight, If you store the closest M stacks again. However, this would take up A LOT of memory (Multiple vector fields, so struct { int dx; int dy; int weight } ~= 12*M bytes PER NODE. This REALLY doesn't work for large world. If the world is small, this is the solution, but if the world is large, I think I can't help further.

Not the answer you're looking for? Browse other questions tagged algorithm path-finding multithreading or ask your own question.