How to find grid cells not seen by an object

I am writing a VB.NET program.

I have a grid view which is made of multiple small cells called grid cell.

On the grid view, I have placed an obstacle (red box) and an observer (blue box).

My task is to find how to find grid cells which are not seen by the blue box. You may refer to the screenshot below. 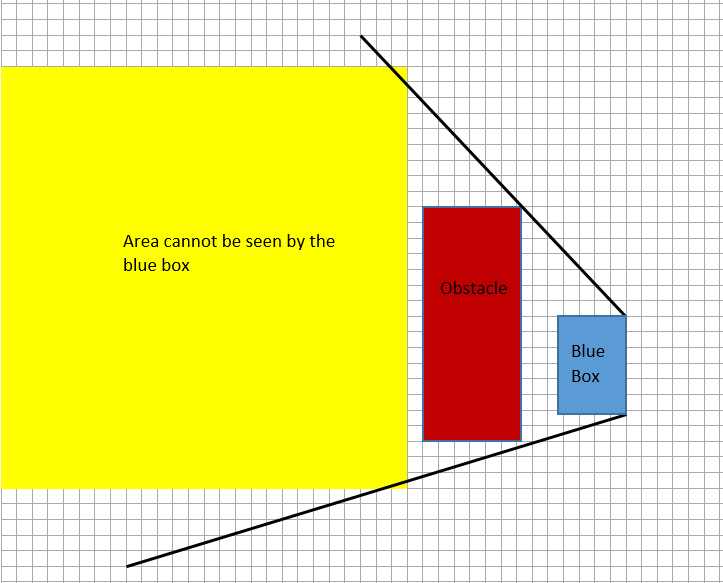 Take note that the yellow box shape is not necessary a rectangle.

1) I have considered to loop through all grid cells in the grid view and check each of them if it is seen by the blue box.

However, there could be millions of grid cells in the grid view and looping through each of them will consume a lot of time and is not efficient.

Is there any better way to locate grid cells not seen by the blue box other than looping through all the grid cells in the view?

The first one is easy: perform a single line-of-sight test between the cell and the observer.

The second is also easy, just perform a line-of-sight test over a subset of the entire grid. Eric Lippert's Shadowcasting algorithm is a nice one that minimises revisiting cells, but I've found a really simple one that performs line-of-sight tests to the boundary cells can also suffice.

For the third one, you can repeatedly perform line-of-sight tests starting from cells nearest to the observer and gradually search outwards, for example in a spiral pattern. Depending on your algorithm, you can avoid unnecessary duplication of cell tests - for example, if a cell that's in the same direction and closer to the observer is seen, we can assume that the current cell is also seen by the observer, and avoid performing the full test all the way to the observer. You probably still want to limit this search somehow, since if the observer is in the middle of an empty field, then the nearest unseen cell could be very far away and you'll have to search many cells. If your grid is especially sparse, you can try a ray-based approach searching for obstacles instead of cells.

You can search more about quadtrees: https://en.wikipedia.org/wiki/Quadtree

There is probably a way for you to divide up your grid into larger pieces, and determine visibility of the pieces as a short cut. For example, if a bigger chunk (say, like an 8x8 group of cells) isn't visible (checking the 4 corners), then you can mark the entire set of cells as not visible.

I haven't tried this, but I think something like this would work...

Take your entire grid, and dividing it into quarters. Determine visibility on each quarter by checking if you can see any of the corners of that quarter. If you can't see any of the corners, then mark the entire quarter's cells as not visible. If any one corner of a quarter is visible, then at least part of it is visible. In that case, recursively divide that quarter up into sub-quarters and repeat the process for them.

Not the answer you're looking for? Browse other questions tagged algorithm grid line-of-sight vb.net .

9
How to find 2D grid cells swept by a moving circle?
11
Finding shapes in 2D Array, then optimising
9
More efficient way to implement Line of sight on a 2d grid with ray casting?
3
Field of view determination with partially opaque cells
58
Can I prevent diagonal movement from exploring more of the map?
1
How to make Flood fill algorithm return different Lists of separate groups in the grid?
0
How to find all possible destinations, within a certain walking distance of a unit?