I need your collaborative knowledge in finding the best way to graphically represent a scene in a manner that would suit a SNES-era rôle-playing game. I've chosen to represent the game in what I'm informed is called "cavalier oblique" projection, which is the same sort of perspective employed in titles like EarthBound: 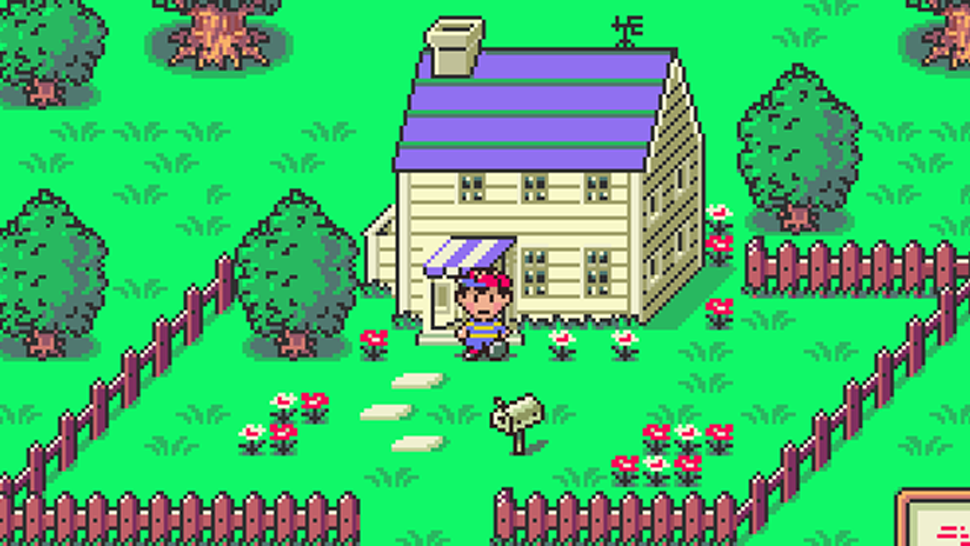 Wherein articles' fronts and one side are shown, but characters face the camera head-on. For as much reason as anything, this is to avoid the "top-down" view employed by 300% of RPG Maker titles. I don't want to look like a "me-too" player.

In the title, the player character has their return path blocked off, with the only path to progression being one leading through a series of very tight-fitting caves. The claustrophobia of the area is very important, as it's one of the main sources of suspense to which the player is subjected.

I can't think of a single way to display claustrophobic, branching caves with dead-ends and very tight holes in the projection I've displayed above. There are a few works-around I can think of that revolve around changing the projection (either to a first-person view, which will be immensely difficult to navigate, or to a side-on view like Dig Dug, which is more intended to show branching paths across a y axis as opposed to an x axis) - doing this risks appearing jarring to the player, however, and I'm aiming for immersion above all else.

I ask you, GD - can you think of any such scenarios from your favourite retro games, and how did they display them to the player? Any reference I can get for a successful execution will be immensely appreciated.

Reduce the players sight-range. You can do that by adding an overlay mask on top of the rendered scene. This simulates the reduced sight-radius of the player-characters due to darkness. 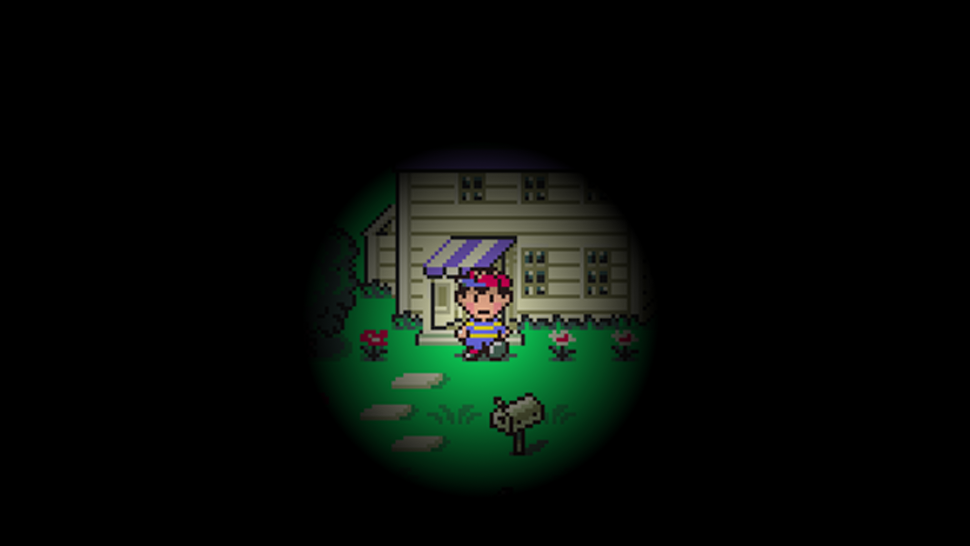 It forces the player to concentrate on a very small section of the screen giving a feeling of claustrophobia. But keep in mind that it disorients the player, so cut the player some slack and don't make the sequence too frustrating to navigate. Having less to look at at the same time also means that your map needs even more detail than usual to both keep it interesting to look at and provide navigational landmarks. More clutter will also contribute to the feeling of claustrophobia by making the map feel more crowded. 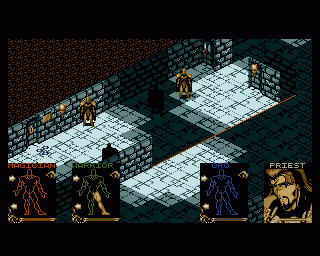 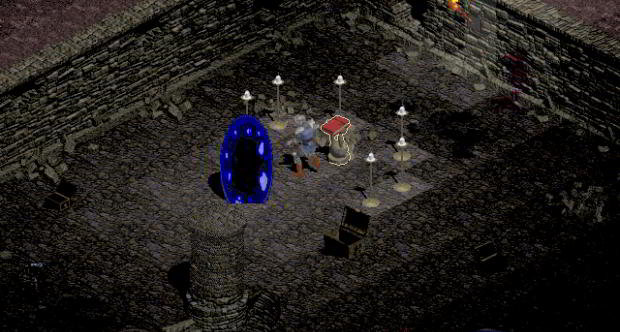 You can do much more with this dynamic, such as easily having monsters only spawn on dark tiles, have light streaming out of doorways and windows, etc.

To induce claustrophobia beyond just lighting, have a look at the way the Maggot Lair was designed in Diablo II (2000): 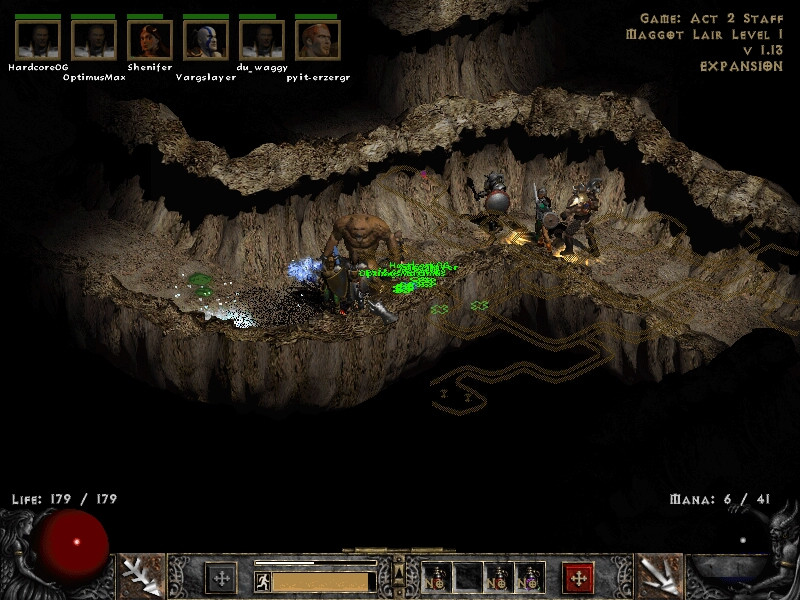 ...constrict these tubular tunnels even further so that they tightly fit the standing height of your character. You can force the character to squat in these spaces, standing at perhaps 2/3 usual height. I don't want to mod a picture of D2 here, but try scaling up the hunch-backed sprite to see how you can pack it tightly into this tunnel. Hanging vines and roots from the ceiling of the tunnels will help too and could even obscure light / vision further up the passage. Dust falling from roof, flickers of movement / eyes blinking on the edge of your sight - cues like this will help for a closed-in feel. Slow movement and restrict combat in tight areas, upping the fear factor further.

As the two current other answers suggest, limiting visibility is a good way of doing this. There are other games which did this. One I can think of is Breath of Fire II, where early on in the game you are navigating a cave with only a candle for lighting. This restricts the visibility and creates tension (which mounts to a nice payoff in that game).

But I have an additional idea. Fear is a component of both darkness and claustrophobia. But for darkness it is because something you can't see could be lurking ahead, while for claustrophobia it is the fear of getting stuck somewhere without the possibility to return. For a short manga story which uses this fear to great effect, check "The Enigma of Amigara Fault". Warning: it is a disturbing read. I suggest you use that spatial aspect to convey claustrophobia.

How? A simple way would be to have the cave start more spacious, but as you progress through the paths make it increasingly narrower. If it is possible to have the visibility range start larger and decrease as you progress, that would help too. To help with the feeling of entrapment, make it so the player has to backtrack at some point but have part of the cave become obstructed, for example by a cave-in, to make it seem initially like there's no way out anymore. Of course you'd have to provide some exit from this in a way that is not as immediately straightforward as following the original path. These things are all quite feasible through level design.

Finally, although not part of your original question, using audio could be very effective too. For example, the sound of a heartbeat, which would increase in rate as you progress through the cave (while visibility is simultaneously limited and the space becomes narrower). To avoid making the effect too obvious, make it very silent and close to the lower limits of human hearing. The Silent Hill games are pretty good with using unsettling audio. An example is early in Silent Hill 2 where, while walking a long winding path, you start hearing footsteps behind you. They are almost, but not quite, synced to your footsteps, and the first time playing it they wouldn't be immediately obvious until you realize something sounds off.

What isn't there or can't be seen is often better at making us afraid than what is visible. The unknown is a large component of fear.

Not the answer you're looking for? Browse other questions tagged rpg projection .