I am developing a 3D game in DarkBASIC Professional, and I have a theoretical problem with the combination of skydomes and fog in general. My question is not specific to a programming language, so I am not refering to code.

What I want to achive

I have tried several things now, and I am don't know what to do to fulfill all requirements. 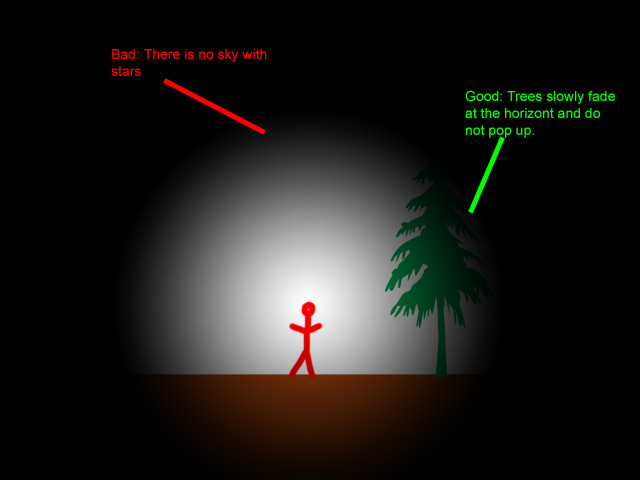 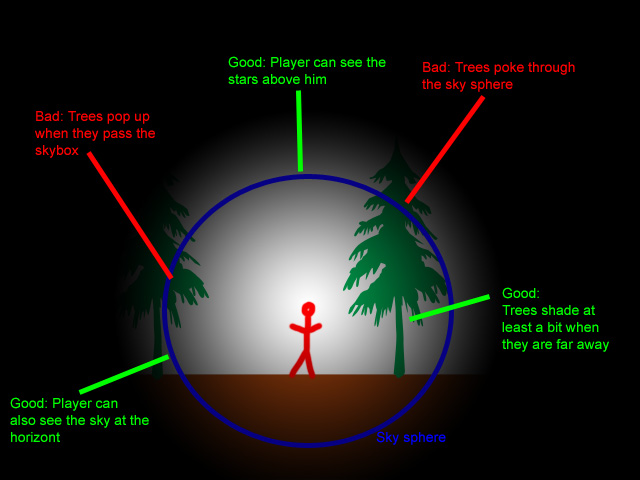 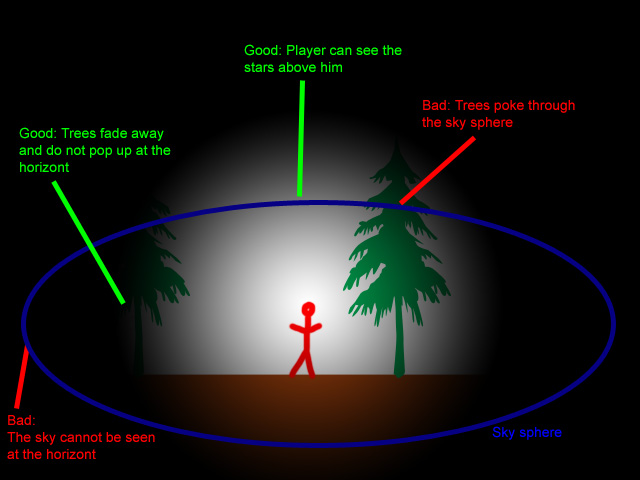 What I actually need

I think I need something like an "elliptic fog". A fog that will shade objects at the horizont stronger than objects above the player (sky). But such a thing does not exist in DarkBASIC.

So I am trying to find out a good solution using the standard techniques fog, ambient light and skydomes to achive my goal. Do you have a solution for me?

You're stuck in a bit of a predicament using an older engine like DarkBasic. The problem as you've already described yourself, is that you can't afford to make the skydome bigger. The reason the trees are popping, you already know, is that they are clipping through the geometry of the skydome. If you cannot make the skydome bigger, there's not much you can do to get rid of the problem. I'm not a programmer so I'm not sure what the limitations are with the engine, but one approach might be to create a pixel depth fade on the skydome material. This is a technique that's used by modern game engines (unreal 4) to give a faded edge around meshes that protrude through the mesh they are intersecting with. They use it most commonly on water meshes where you have rocks jutting out of the water and they don't want the intersection to look sharp. This won't eliminate the problem because the trees will still be intersecting with the skydome, but it will fade the point of intersection around the trees so it might look less terrible.

Another alternative would be to make the stars using a different method. You could try using a particle system (not likely in DarkBasic) or you could make a custom star mesh for the stars that's not a sphere.

The other more obvious alternative now that I think of it is to change the shape of your skydome to be elliptical instead of trying to create elliptical fog.

Not the answer you're looking for? Browse other questions tagged 3d shaders skybox sky fog .

18
What are the differences between a skybox and a skydome?
4
OpenGL light appears to move with camera and changes with object rotation
3
Skydome and Ambient Intensity (Unity)
0
Advice on how to approach building background glow for 3d galaxy?
1
Transform luminosity (Watt) to be usable in shader
4
In VR Games, i frequently notice that skyboxes look too close. Would this be a method for making them appear more distant, especially for space games?