How to create a dynamic Map in Unity (Augmented Reality)

I created a dynamic map with a LineRenderer. The LineRenderer gets a new position assigned, for each movement my 'character' does. It works good, but I expect it to get a really bad performance at some point. Could you recommend a better solution to create a dynamic map with the free version of Unity. My code looks like this at the moment :

The LineRenderer lies on a layer, which can only be seen by my orthographic mini map camera. Btw. I need it in a dynamic way, because it's an augmented reality app, which has no terrain which I could display on the map or stuff like this. I have to create the stuff which should be displayed. 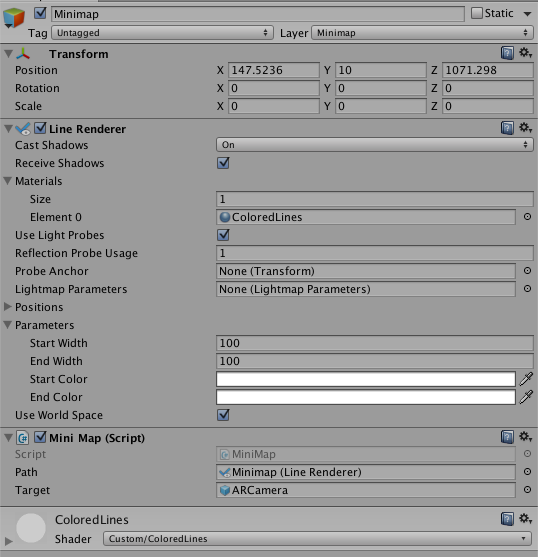 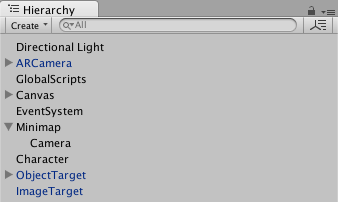 OK, so lets assume in spite of the above you're observing real performance issues that are definitely caused by the LineRenderer. Here are some ways to address that.

First, you need to make sure you're not rendering anything unnecessarily. I believe Unity will cull the parts of the line that aren't in the frustum, though I haven't explicitly tested that recently. If you zoom into the cube in Vectrosity's Demo #3, there appears to be culling, though whether that's Vectrosity, the demo, or Unity, I haven't checked just yet.

If it does not cull for you, then you may benefit from doing your own. There are many ways to accomplish this, but mostly they hinge around determining which points should be visible (perhaps using QuadTrees/Octrees) and re-creating your line periodically to show only those points. You don't need to maintain an object that can't possibly be visible.

Likely, this also involves breaking your line into multiple LineRenderers. I.e. if a player walks down one side of a street and then later the other side of the street, you shouldn't be trying to render everything between those two paths.

A second approach is line "compression" - removing unnecessary points. Players generally won't care too much about having a perfect record of their path, so you can remove points from your line once you recognize they're not helping.

A good starting point for this is the Ramer-Douglas-Peucker algorithm.

Is It Really Necessary?

The easiest way to optimize any task is to realize you don't need to do most of that task. If you don't think the player really needs to know their long-term history, you could simply keep track of the past X points and only draw those.

I realize this is all pretty high-level. If you'd like more detail on any of these, or if I totally missed your actual question, let me know. :)

Not the answer you're looking for? Browse other questions tagged c# unity maps augmented-reality or ask your own question.

4
Rotations and angular velocity
1
2D Side Scroller Game Without A TileMap
2
How to create a material that blends textures in Blender to Unity workflow
3
Vuforia AR/VR sample with Google Cardboard SDK: I cannot switch from augmented reality to virtual reality
2
Unity LineRenderer custom reapeted Texture with margin
1
How can I port my Gear VR app (Java, OpenGL ES) to Unity?
0
Unity augmented reality app doesn't work on android