What is the easiest way to move towards and along the edge on a hex grid?

I have a hexagonal grid with variable radius. My entity can move exactly two hexes per turn.

How should I calculate next step towards border and afterwards travelling clockwise around map?

Preferred movement at the boundary

Character should stay at the border while moving counter-clockwise every turn. 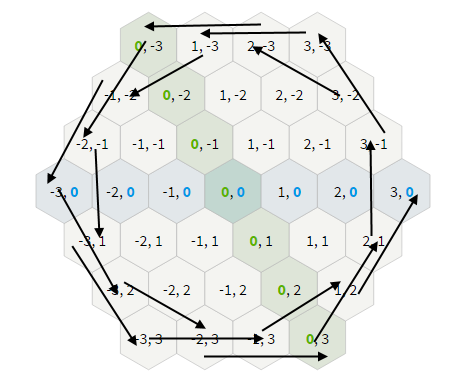 Example movement at the middle

Character should move 1 or 2 hexes towards edge every turn. 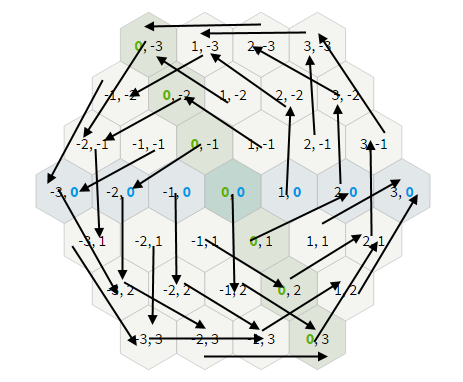 I can't figure out simple math to do this.

This is how I did movement at the boundary:

Any ideas how should I clean this up?

Shortest path to boundary is probably easiest to calculate from x, y and z.

movement hexagonal-grid
Share
Improve this question
edited May 20 '18 at 10:48

I think it'll be easier to solve this if you move one step at a time instead of one-or-two. For each location on the map there's a single direction to move in. Let's calculate that direction.

First observation: if you're using the 3-valued “cube” coordinates, the largest coordinate tells you which of the six “wedges” you're in. Here's a diagram showing the colors: 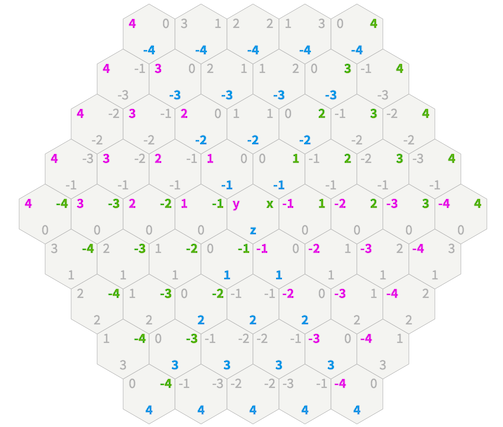 Second observation: once you know which wedge you're in, you can decide how to move relative to that wedge direction:

Following these two rules you'll get something like this: 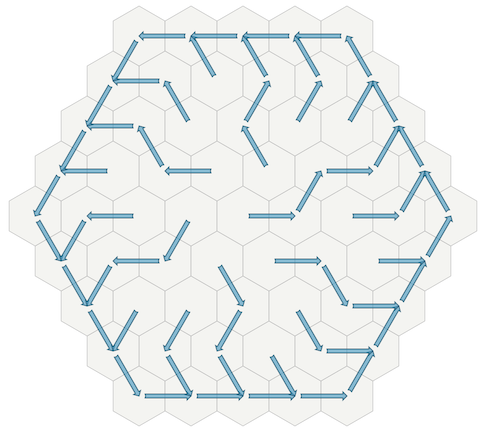 I've also written this up here.

I would do it in two 1-cell steps instead of a single 2-cell step, it’s a lot easier to implement.

Using your coding style, here would be my first try:

not a mathematician here but you could divide this problem in 4 distinct sections, like the quarters of a circle. Then, by checking which direction is closer to the edge, move along that path. ex: (2,-1) the (+,-) sing informs us that it`s located in the top right quadrant. then, we know that the edgemost closest hex is 3,-1 but you can deduce by using the max x value at y=0 or the max y value at x=0 and then substract your current position to see where the closest edge lies. then, we can see that there's some very easy rules to follow the edge counter clockwise if taken into quarter cases.

for example: Case 1(top right) if you're on the edge (x cannot go higher) move up along the y axis. if y cannot get higher, lower x until you reach (0, max y) which would be the top most coordinate and from there, move into quadrant 4 (-,-).

just my 2 cents, as i said, not a mathematician.

Not the answer you're looking for? Browse other questions tagged movement hexagonal-grid .

3
What's the best way to move cars along roads
3
How can I move an object towards another along a straight line
0
Designing Character Movement Need Advice
2
Beginner: How do I calculate a vector?
3
How do I limit the rotation speed of a mouse-following object?
0
Move vehicle towards the cursor
2
move toward object and transition to circling around it.
4
How to efficiently (no pointers) store hex grid with shared edges and vertices?
3
How do I sort edge tiles for a hex grid in order to draw a border?