How to prevent players from getting lost during the onboarding phase of an RPG?

I've created a new RPG and tested it with some players. They like it, but get lost at certain points.

For example, I'm using hotkeys to open modals, T to talk, and other buttons that do various things. Moreover, some of the quests aren't entirely clear.

To fix this, I'm trying to think of a good onboarding approach.

1) Cutscenes: The cutscenes, especially the opening scene, will give the backstory and explain where they are

2) The NPC dialog: Through conversations with NPCs, they will give hints as to what you should do. Right now, I include, somewhat awkwardly, things like:

3) Onscreen Tooltips: These blink on screen until the player completes the current onboarding task. For example, the tooltip disappears when the player clicks their minimap: 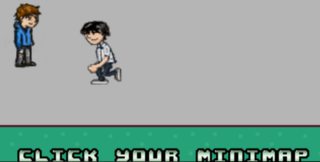 I'm looking for a more cohesive strategy for onboarding users to the game, or good tutorials for this. Two things I'm weary of are:

I've seen a lot of techniques for various game genres, and even things like Google apps, where they have a glowing choice for the user to click on. I'm a sole developer, and some of these techniques seem quite complicated to implement.

Cutscenes can be nice, but try to avoid too much infodumping. A long-standing rule of storytelling is "show, don't tell". It is usually better to tell the player almost nothing about the world beforehand and introduce the background as they play. Take, for example, the first hour of Half Life 2. There is a short intro cutscene, but it is so cryptic it tells the player absolutely nothing. But then the player walks through the world and learns that the game takes place in a run-down city occupied by a technologically advanced and oppressive power just by looking around and interacting with the environment / having the environment interact with them. This interactive introduction through which the player experiences the backstory and the scenario of the game is far more immersive, engaging and most of all easier to remember than just telling them all of that in a cutscene.

A good non-interactive intro custcene, on the other hand, should be visually impressive and emotionally engaging, but rather raise questions about what is going on than answering them. The usual reaction you aim for when writing one is that the player asks "What the heck did I just watch?" after seeing it for the first time but then think "ah, so that's what this was all about" after they played half the game. A good example is the one from the RPG Arcanum from 2001. There is a knight with a magic sword. There is another knight. They seem to want to fight. Who are they? Where are they? What are they fighting about? No answer. And then one of them... draws a gun?!? What's that travesty!?! Knights are supposed to have swords, not guns. Explain yourself, game! But after playing the game for a while you realize that this is a world in which a knight can indeed carry either a magic sword or a gun and both are reasonable weapon choices.

Dialogs: First of all, it is not bad when tutorials break the fourth wall a bit. When you can do it in-character, great. But sometimes you need to tell the player about the buttons in front of them. You can do that by separating the in-character and out-of-character information visually. For example, have a character say "Talk to me when you need anything" and then have a disembodied screen overlay reading "Press T to talk". When you try to do everything in-character you end up with awkward dialog where people living in your game world talk about buttons which only exist in the real world. This breaks the immersion far more violently than a user-interface where the player is aware that only they see it and it's invisible to the characters in the game.

Players getting lost: You should avoid giving the player too much freedom during the discovery phase. Even when you prefer a more open-world experience, you should keep holding the player's hand while they still learn the game mechanics. Introduce one mechanic after another and do not let the player continue to the next before they've shown that they understand it. A common beginner mistake when developing RPGs is throwing the player into a too large scenario (both spatially and narratively) while they are still busy learning controls and mechanics and don't have any attention to spare on understanding the world around them. The first scenarios you put the player into should be small and linear. Have them "earn their freedom". Reward them with gradually larger and more complex scenarios with more freedom of movement and more narrative complexity. Do not set them free completely before they are familiar with all your core game mechanics and the basic story premises.

Also make sure that the player always has something to do and knows what it is. In an open-world RPG a quest-log can be a good tool to achieve this.

Tutorials are hard and I've been trying to find a good way to make them for a while now. My number one recommendation is to look at games that have found a way of fixing this problem. I would start at Portal 1. The games first levels were really all tutorials but no one noticed. I also think that you should watch this Youtube video: https://www.youtube.com/watch?v=BCPcn-Q5nKE I'm not sure if I'm allowed to post this but I did. I hope I helped. Best of luck to your game

Not the answer you're looking for? Browse other questions tagged game-design rpg tutorials or ask your own question.

37
How to design the attack class in an RPG game?
0
How should data about past interactions be stored?
134
How to avoid players getting lost in and/or bored by the meta game?
1
Ideas for fair travelling system for text based RPGs
4
How to prevent players from using save/load tactics in Roguelike games?
1
How to prevent players from forcing the veto-holder to give up their veto power?
19
How can I discourage players from attacking everything they encounter?