Orion Leap Motion`Hand' does not exist in the type `Leap.Leap' - Compile error for core assets

I was playing with the example scenes provided by the Core Assets pack. Everything was working perfectly in Unity 5.3.2f1 until I opened the PinchingSandbox scene and added two script components to the HandControllerSandbox. I added Hand Cycler and Recording Controls. These scripts were available from the add component drop-down list. Naturally I planned to add my own code, but I first wanted to see if the scene would still run.

Instead of running I suddenly get hundreds of AABB aabb errors which by the look of things is still an unresolved Unity issue. So, I remove the two script components but this doesn't resolve the issue. Perplexed, given that the PinchingSandbox scene worked fine just before I added those two scripts, I waste no time deleting the project and starting afresh.

I imported the unity core assets from the unity asset store like before and now I am very perplexed that I get the following error messages (I have tried reimporting the assets): 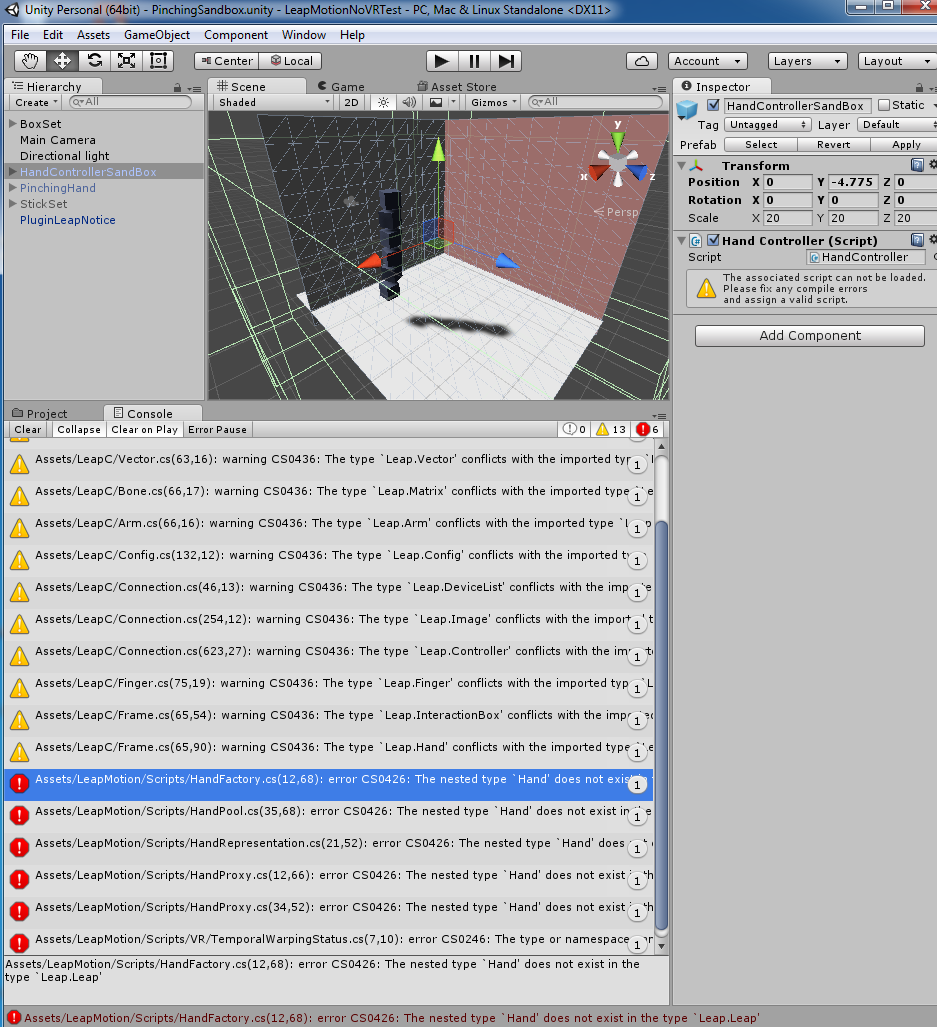 I am using Orion, and am not using VR just yet

As pointed out to me by Joe_Ward:

Orion is not compatible with any earlier asset packages. You can use one or the other, but you cannot combine them.

And sure enough, I had tried importing both the Leap Motion Core Assets and the Leap Motion Orion assets which I had assumed were identical. Once I imported only one or the other the issue vanished. Consequentially, I can now add scripts and modify my virtual hand's behaviour with reckless abandon.

Not the answer you're looking for? Browse other questions tagged unity assets scripting .

1
Why does Unity not detect my camera attached via the inspector?
0
All scripts in Unity game can not be loaded
2
How to instantiate an array of Prefabs in C# Script
1
"error CS0246: The type or namespace "NAMESPACE" could not be found" while declaring that namespace usage
3
How to handle assets in Unity?
0
TextMesh Pro conflict in Unity2019.1.5f1
1
Rigidbody script throwing error CS0246: The type or namespace name `MouseLook' could not be found. Are you missing an assembly reference?
0
How to set up Easy Mobile Pro to work with assembly defintions?