Picking a 2D Box Collider with the mouse in Unity

I have a scene with a bunch of 2D doors that have 2d Box Colliders (no trigger) on them and that live on a Canvas. I would like to be able to click on them with the mouse, but have had no luck.

Following this earlier topic: (2D) Detect mouse click on object with no script attached , I did the following:

However, (hit) is always null. I have no RigidBody2D objects in my scene, because I only need mouse selection, not any interaction between objects.

In the inspector I the green box collider but clicking within it in the scene (not the inspector, obviously) runs the MouseButtonDown() code but still no Raycast hit.

What else could I be missing?

To reduce this to its simplest, you can do the following:

You should create Buttons instead of Images if you are working in Canvas. There you can assign image and events.

I am not sure what is wrong with your script as it seems fine, are you sure you have setup your images properly? I have the following setup in my inspector with the following code and it works. 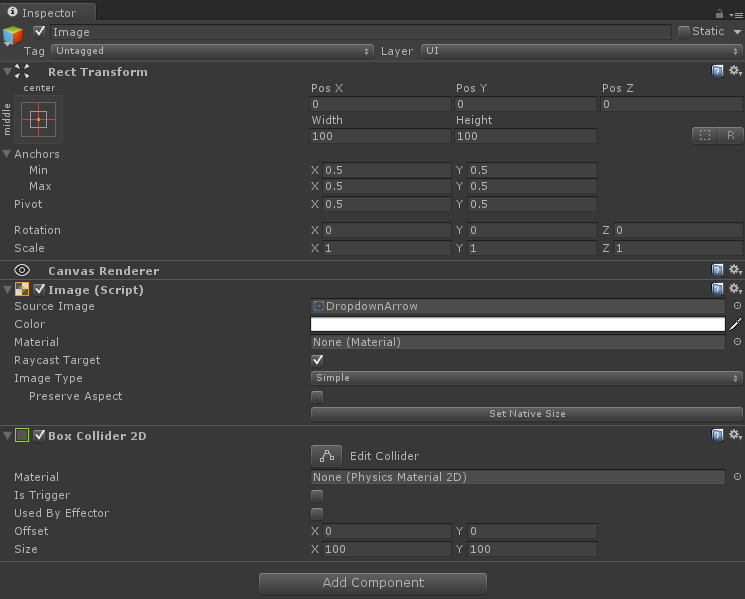 For more advanced things you might want to look at:

IPointerInputModule - I would link but the rules of this site are very draconian.

If you are open to having a script on the game object using the built in method OnMouseDown() works great to detect when clicked or tapped.

Not the answer you're looking for? Browse other questions tagged unity 2d collision-detection .

7
(2D) Detect mouse click on object with no script attached

3
Detecting mouse clicks in Unity UI Beta
0
Accessing Canvas and Button components in a scene
1
Unity 5: Check if an object's collider contains the mouse click point
0
Unity Editor: Get Mouse coordinates on left click on Scene Editor
1
Changing tag on collision
0
How can I make the droid object to act like a mouse cursor?
0
Why RaycastAll misses some objects?
0
Why the OnCollisionEnter is not working?
0
Detecting a mouse click While in a Trigger