How do I get basic collision, in Unity, for an imported sketchup model?

How do I get basic collision, in Unity, for an imported sketchup model?

My friend and me are new to game development, and we have to submit the game within a week. Please help me.

I downloaded an airport model from 3D Warehouse, and we imported it in to Unity 5.1.2, but our character is going through all the objects in the airport. Please find us find a solution.

You mean collision, not trigger. Trigger volumes are non-solid.

In Unity, in the Component menu under physics, add a Mesh Collider.

By default, it will select the same mesh as the model, but you will probably want to make a low-poly mesh to use for collision instead of the full detail one you use for visuals.

Add 3D cubes in the scene near the floor of the stadium, it will have a default 3D box collider in it. Scale it as your need. Then it will work as collider which will keep your character just in the stadium plane.

Trigger is an another variable that makes the collider component penetrable. I guess that's not what you want.

To stop your player from being able to walk through objects in the scene, you need to use colliders. Colliders are components that allow us to define a shape or area for processing collision events. This includes physically preventing a player from walking through walls and other game objects.

Adding a collider is fairly simple. Select the object you wish to add the collider to from your hierarchy, and on the inspector, select Add Component. From here, you can select the type of collider you wish to add, or type "collider" to view all of the collider components presently available to you. 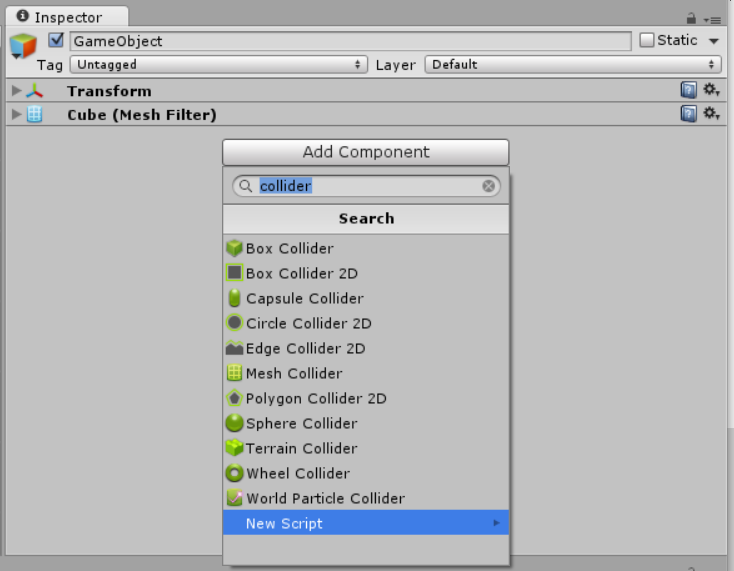 There are many possible collider types to choose from, so which one should you choose? First and foremost, since you are creating a 3D scene, you should not be using any Collider 2D component. Physics works differently for 2D and 3D, so 2D colliders will only interact with other 2D colliders, and by default will only respond to 2D physics events. The same goes for 3D colliders and 3D physics events.

Of the remaining options, there are five particular colliders that stand out:

Choosing between them depends on the object you are placing the collider on, how detailed you want your collision to be, and how efficient you want your collider to be. Consider the detail in your game objects. As an example, consider a brick wall. In the real world, you could feel the detail on the bricks, and in indent of the mortar between each brick. In a 3D game, this detail is unlikely to be noticed, apart from your game potentially stalling to calculate collision due to the far more complex collider. In this case, a simple box would suffice, as the player would still react to the basic shape in practically the same way.

Choosing the objects to place the colliders

If you ever want to have any other reaction to collision, such as having the player take damage or triggering a door to open, you will want the collider to be on the same game object as the script in charge of its reaction. This is because colliders automatically call a number of MonoBehaviour functions, such as OnCollisionEnter(Collision) and OnCollisionStay(Collision), which greatly help you perform your collision logic. You do not need to set any of this up for simple 'prevent the player from walking through this' collision.

To get everything working, there are a few tiny details you need to ensure.

You can read up on colliders in the Unity Manual. There is also a good Unity tutorial on colliders that will show you the basics. If you are more experienced with the programming side of Unity, you might also want to read through the API entries, including Collider which acts as a parent class for all 3D colliders.

2
When is it the right time to start teaching collision detection?
2
2D collision of thrown objects in Unity
3
Any way to load/execute scripts (game-logic) included in a post-release DLC (Unity3D AssetBundles) on iOS since it seems its not allowed?
0
Can't move character at all in unity basic platformer guide
1
Unity mesh collider detecting collision on object empty inside
1
Basic billiards game: Can't detect collision between cuestick and cueball
0
Collision Player and Tilemap Unity