I have a 3D cube that can be rotated with the mouse to show any side of the sphere.I want to be able to click a point on the cube and draw a circle around that point at a fixed height(so i dont need depth information), however i run into a problem where i cant translate the screen coridiantes to the worldspace coordinates. What i have attempted:

However, this does not give me the world coordinates as i would have expected. Where am i going wrong?

The depth information is not needed form this, i only need to map the mouse click point (x,y) to the world point (x,y,z) where z is fixed.

Edit: The fixed axis is the y-axis, the z and x axis are the changing axis

Edit: I have revised the question after realising my mistakes in the initial question. 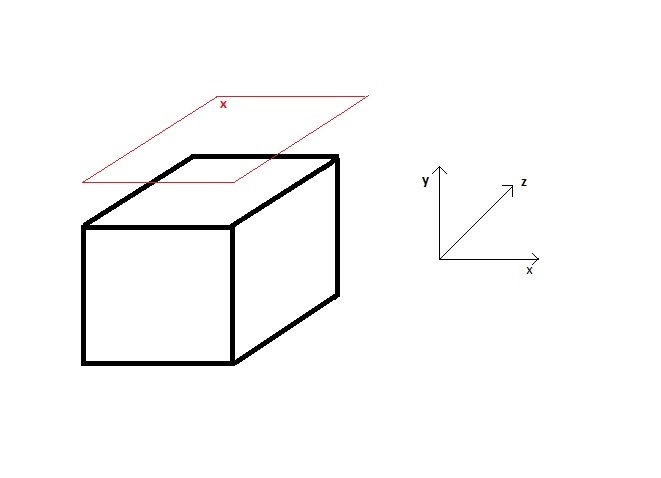 The x, y, and z are positioned as shown above. I want to be able to click the cube surface and drwaw the shape at a point with a fixed y-offset from the click point.

I am not able to draw a plane on the surface of the cube due to the nature in which the cube is generated hence the need for the screen to world coords.

Not 100% sure of what you are trying to draw where, but neither Z=0 nor Z=1 correspond to the location of the cube in world space. Both points, however, do define the ray shown below in red. You can run an intersection test between that ray and the cube's BoundingBox to determine the exact world coordinate of collision. "Depth", which you claim to not need, is actually the calculated length of the collision vector. The Z of your cursor position comes directly from it.

If you project CollisionPoint to screen-space, the resulting Z value will approximately match the value that is written to the depth buffer, if one is in use, and enabled.

If my assumptions are correct, you would draw your "3D circle" centered at
World(24.15, FixedHeight, 50). 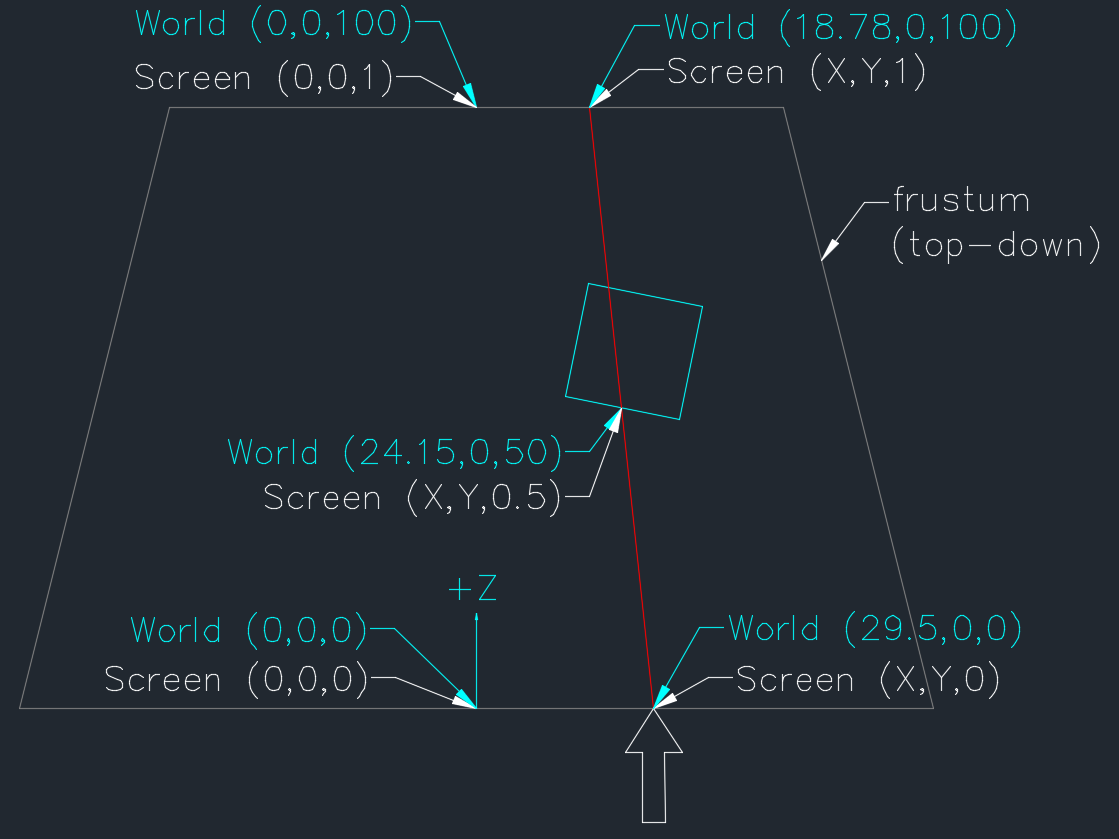 Ok so this is my solution:

since the troube was broght about by the missing z coordinate, it check for intersection with the plane and store the z-coordinate. i then use this same coordinate when unprojecting using the code above and it seems to work fine. Thanks for the help

Not the answer you're looking for? Browse other questions tagged directx11 or ask your own question.

2
Problems with converting from Screen Space to World Space

1
Is my idea of how to use matrices to layer 2D on top of 3D correct?
2
Quad Texture to Pixel Screen Space (DirectX 11)
5
World, view, projection matrix?
2
Primitives LINESTRIP Closing to the first point?
4
Restricting movement to 3D axis
0
Is object space the same as local space?
1
Calculating 3D character movement based on YAW and Pitch