In Unity3D, how do I move the camera with the mouse without spinning it on its axis when looking down/up?

I'm currently trying to recreate how Space Engineers work with their first-person acmera in Unity 3D. I'm currently stuck on how to make sure the camera doesn't spin around its axis when looking downwards or upwards, like a sphere. I've looked through several available online snippets for assistance however they all use quaternion to rotate their camera around an axis; this isn't what I want.

Any advice or examples? I'm new to Unity3D by the way so I'd appreciate a basic overview of how it works before the "scientific" language.

This is what currently happens when I look up or down and move left/right:

What I want to happen wherever I look up/down or not at all: 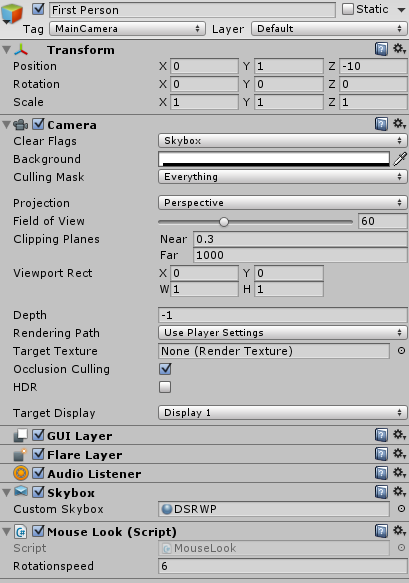 The trouble you're encountering can be solved by applying small relative rotations to the camera's current transform rather than setting an absolute rotation with a Euler angle.

Sadly the Unity API is rather cryptic when it comes to this; I believe this code should work, but the concept is correct either way. When updating the camera take the mouse deltas and apply rotation around the current transform's up and right axes.

For reference take a look at Unity's transform.Rotate documentation which I believe is what you're looking for.

EDIT: this answer was addressing the problem as originally formulated by the OP, i.e. "how to make sure the camera doesn't spin around its axis when looking downwards or upwards". For that, the answer was perfectly useful (I suggest fellows to always look at previous versions of edited questions before down-voting answers). That said, now, in the question's current state (i.e. how to implement a 360 degree turn to any direction a mouse-moved-camera looks at), the OP needs precisely what @Vector57's answer provides correctly and elegantly

It is very hard to give a proper answer without seeing anything that you have implemented so far. So, I can only give you a general-case answer, and I do that only because I suspect what you might be talking about is a rotation effect that can be easily solved by clamping the Y axis of the camera rotation.

So, I suppose that you are retrieving the mouse position with something like:

And then you are probably rotating the main camera with something like:

If that is what you are doing, you just have to clamp ybefore that last step. Clamping y means to force the above variable y to be greater than a givenlower_limit and smaller than another given upper_limit (usually -+85º works fine for me).

2
Show the tooltip when mouse over at the object unity3d
5
smoothly recenter view over time
1
Rotation around arbitrary vector (using quaternions?)
2
Help with character turning?
0
Main camera transform.forward becomes up and down when looking from above
1
How to completely stop the camera from clipping into the ground
0
Move camera while dragging with mouse