How to make an Assert.IsNull test pass when the value is reported as <null>?

I've just started using unity tests with the built in editor tests. After making my test and finding out that it constantly failed I debugged the code and found that a static object was set to a new game object when running the test while it is set to null when playing in the editor.

Is there a way to force unity to treat the test the in the same way that it treats scripts at run time?

After changing some code around i get another strange error: 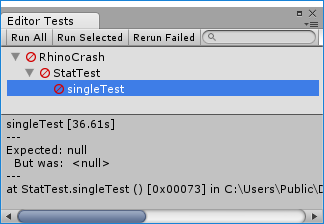 does anyone know why "null" isn't "null". The null objects are stored in an array, but that shouldn't make a difference right?

Here is the code that has the issue

and here is the test:

There are two flavours of "null" in Unity:

Using DestroyImmediate() should put an object into this state immediately, while using Destroy() will do so at the end of the current frame's updates but before rendering, which can often help avoid order-of-execution bugs when multiple scripts are referencing an object.

The thing is that a "pseudo-null" reference isn't actually null, which you can confirm by calling:

...or by trying to access any of the object's members - you won't get a null reference exception, but a Unity MissingReferenceException (which is handy, because the debugging tools can tell you more about which object got destroyed while a script was still trying to use it - something we don't get from real nulls).

This psuedo-null stub will remain until all references to it are cleared/go out of scope, using normal C# garbage collection rules. Read more about the reasons this exists in this Unity blog post.

How this applies to your test

My guess is that Assert.IsNull() at the end of your test is internally checking for real null instead of comparing with the overloaded operator.

(Especially if you're using Microsoft.VisualStudio.TestTools.UnitTesting.Assert rather than Unity's version - I don't see any using statements in your code so I'm guessing)

Since the destroyed object is only pseudo-null, this check comes back false, tripping the assertion.

We can ensure it uses the overloaded operator to also detect pseudo-null by rephrasing the assert at the end of your test as:

We know this == will return true for a Destroy()ed object, whether it's recently-destroyed or long-dead, so this phrasing reliably checks for what we want.

Not the answer you're looking for? Browse other questions tagged unity debugging testing .

4
In Unity, does a reference delegate clear out when its parent GameObject is destroyed?
2
Why can't we put GameObject's into a NativeArray and pass them to a Job?
0
Unity c#: Interface object never equals null
1
Why does component.GetComponent<Rigidbody>() return "null", when a rigid body is NOT attached?
1
Lag in Destroy() method

3
What's a viable way to get public properties from child objects?
2
What's the proper way to use static objects and singletons in Unity?
1
Unity - Avoid using Find method by caching UnityObjects - Code review
1
How to change an int value in the Unity editor
2
Unity associated game object is null when running
1
Unity 3D [C#] - How to properly reset a scene
3
How to completely stop the camera from clipping into the ground
0
How to make extendable Mario warp pipe in Unity?
3
How to create a solid cross-scene game manager in the editor of unity?