Vector math to calculate the rotation and drift of a tectonic plate?

I've been following the excellent Experilous procedural planet generation post, trying to recreate it in Java using libGDX. My planet is simpler, as it lacks any distortion of the mesh. It's just hexagons and 12 pentagons right now. However, I've been running into trouble at the part: 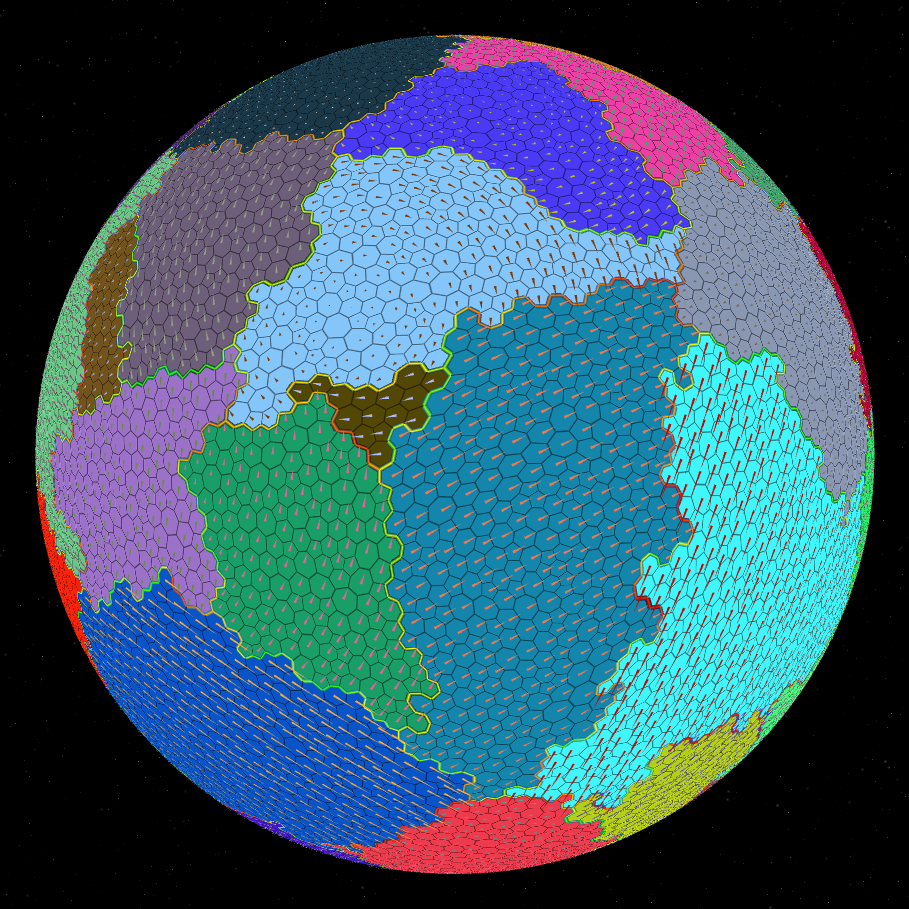 The next step was to take the motion of plates and calculate the type and degree of stress at each point along the boundaries between the plates. For each point, I calculated the movement of each plate at that particular position. Subtracting the two gave me the relative movement. I then determined the component of that movement that exactly perpendicular to the plate boundary at that location. This corresponded to the amount of relative movement that was directly pushing the plates into each other or pulling them directly away. This I classified as pressure, and it could be either positive (collision) or negative (separation). I also determined the relative movement that was parallel to the boundary and stored this as shear. (Only the magnitude of this movement was relevant, so shear was strictly non-negative.)

The picture is the example of each tile's motion following this calculation of drift and spin for the tectonic plates. However, the math to actually calculate this completely escapes me. Given that I have the tiles grouped into tectonic plates, a random center (of a tile) for each plate, the center of every tile, and the normal vector of every tile, how could I achieve the same effect depicted here?

Try to reduce the problem down to simple structures.

Representing each plate, mathematically, with a sphere:

Whenever two spheres collide, both spheres impart a portion of their rotational velocity around the planet's center to each other, weighted by their proportional masses. At the same time, each one also imparts a portion of it's own sidereal rotation to the other. This means that larger masses can easily push smaller masses around. Similarly, a massive object spinning clockwise will impart a large counterclockwise force on less-massive objects it collides with.

Each frame, apply each sphere's changes to its' child tiles. The result of tile collisions should be proportionally scaled and then applied back to the parent sphere. Essentially, the spheres will try to rotate all of the tiles and the tiles that collide as a result provide feedback to the sphere. 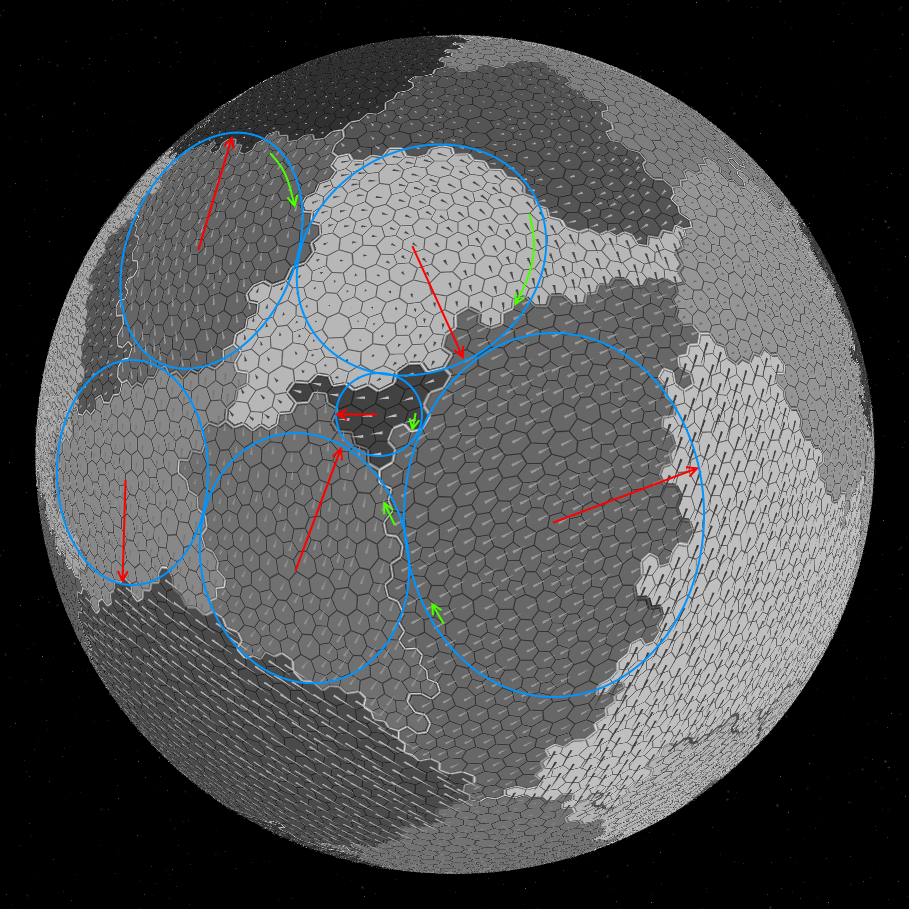 Red is movement and green is rotation. The magenta arrows are approximations of the forces calculated at two example collision points. Both masses are of relatively similar size so neither has a clear advantage at the perpendicular intersection site; the two plates are likely to grind along the edge for a long time. The parallel collision site happens so far from the top-left sphere's "center of mass" that the lower-right sphere can easily overpower it. Over time, the two should dance such that the upper sphere "rolls" down the left edge of the lower sphere. 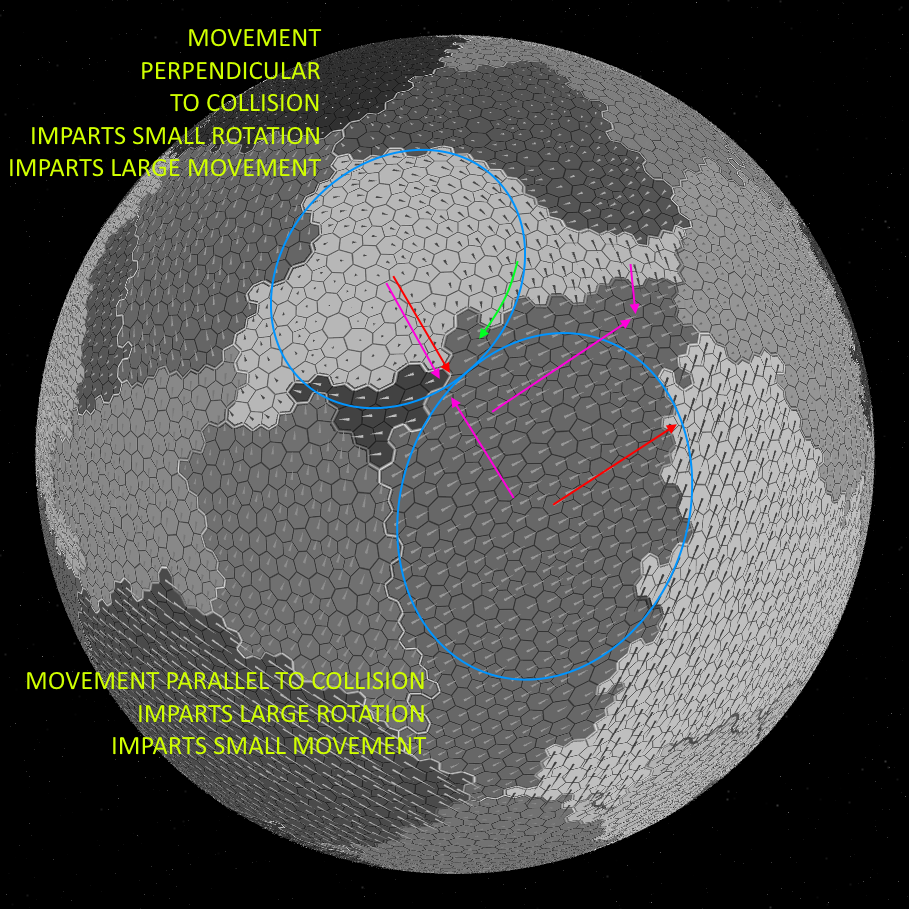 Assuming the other plates allowed it: 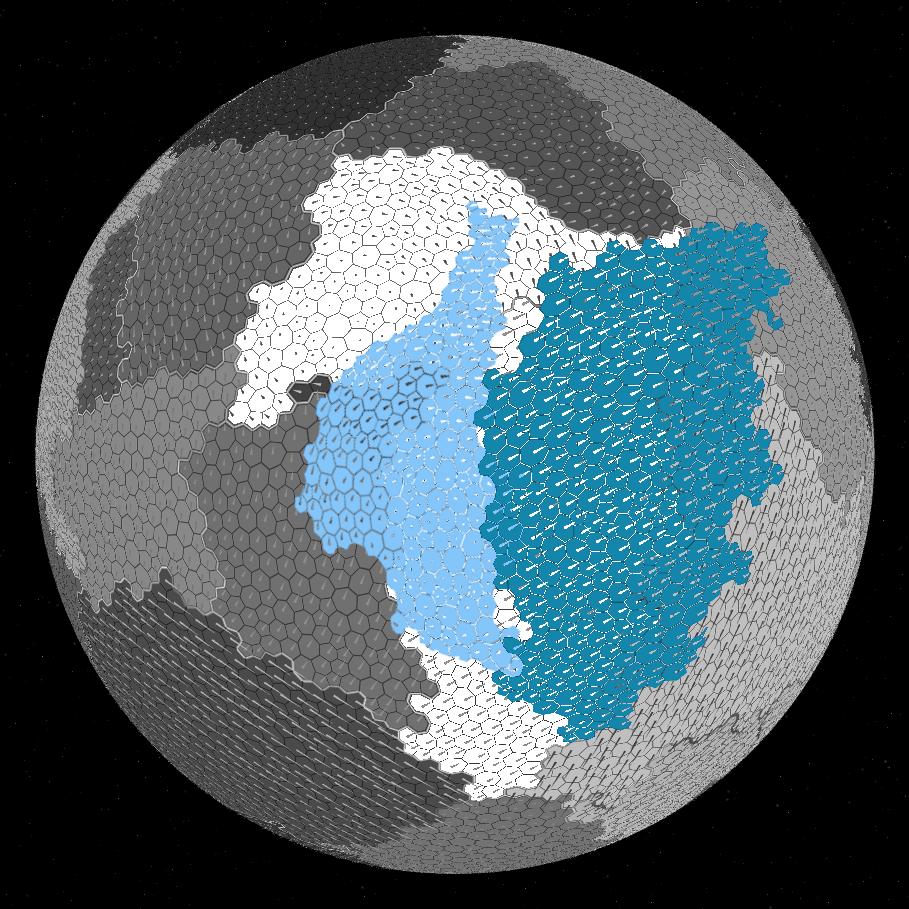 What you're referring to as spin is formally called angular momentum. Depending on the level of detail you want, it can get complicated fast; this Q/A on Simulating Torque and Angular Momentum might be a good starting point.

Not the answer you're looking for? Browse other questions tagged mathematics vector procedural-generation .

24
How to quickly calculate the sight area in a 2D tiled game?
5
Understanding math used to determine if vector is clockwise / counterclockwise from your vector
5
Vector Math question
3
Smooth Biome transitions with tile map?
2
Beginner: How do I calculate a vector?
1
Should I store local forward/right/up vector or calculate when necessary?
1
Camera math: How to calculate the horizontal and vertical angle from the look at vector
0
How to calculate the dot product between the input direction and a character with root motion?