Round position to center of current grid position

The title may not make sense, nor may the question - I'll try nevertheless. I'm attempting to make a game similar to The Powder Toy.
Essentially, this is a physics simulation game, where the users create various structures using the provided materials.
As of now, I've created the grid, and given the user the ability to draw with grey cells (or, Stone).
Of course, this may seem like what I would want - however, all the cells are stored in a two dimensional array. When the user clicks on the screen, the program round the x and y of the cursor to the grid, and adds to the array like that.
What I want to happen is for the cell to change in the place of the cursor, instead of rounding it to the nearest cell.
I've attempted to explain it in this image: 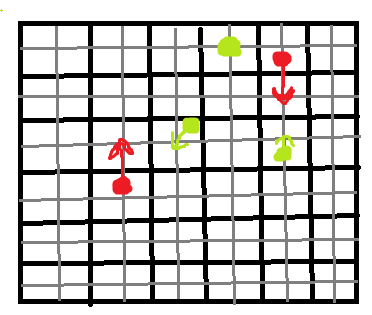 In this image, the green large dots are the mouse position, and the place at which the arrows are pointing are examples of where the cell could be.
Green represents what I want to happen but in most cases doesn't, and red is what does happen, but what I don't want.

Here's part of my function to set the cells:

Where set_px sets a certain item, this is used to draw to the screen.
I hope this is enough information, but if you would need anymore to solve it, I'd be happy to update the post to include more code.

Oh, and I should probable mention I'm using LibGDX.

What you really want to do is "floor" instead of round. Flooring rounds down, which will select the corner of the cell that the is mouse pointer is in, instead of plain rounding, which rounds to the corner that is closest to the mouse pointer.

I would modify your set_px method to take in arguments of type int, instead of a Vector2 (which uses floats and can get confusing).

I would also take a look at Java Naming Conventions!

Ok this is how i would do it.

The new vector2 arguments should give what cell number your clicking on in relation to your array.

So if I understood, you want to get the cell that is clicked so you can color it.

Not the answer you're looking for? Browse other questions tagged java libgdx grid or ask your own question.

3
How can I make grid tiles/plane transparent
0
GO Game, placing stones on grid intersections
5
Map building grid to planet
0
Calculate land center on grid
1
2D grid based game merging boxes
6
List cells in a 2D grid that belong in a sector / portion of a circle
0
Trying to understand why libgdx wipes existing models when creating new ones
1
Find grid cells in 2D grid based on object size and rotation
0
Draw animating grid with terrain deformation and variable colors