I have a strange issue in my engine where my SSAO effect will extremely darken or lighten based on my camera angle:

In that example, I'm just outputting the ssao texture to the screen. The texture is stored as a single (red) 8 bit channel.

I've been following a few tutorials here and there for building my SSAO shader, primarily this and that, so my code is pretty much identical.

I've done some research beforehand, however I couldn't really find anything that matched my error.

The only thing I found was that some people who were doing SSAO do this thing where they offsetted their scene's normals before saving it:

And then when needing to access the scene's normals, they revert the offset such as:

This type of thing I can almost understand, but I've never come across this is any tutorial that I've been following for any of the shading I've been doing up to this point. Further, the normals are normalized so much anyways. Regardless, if I do this or not, surfaces running parallel to different axes do the exact same thing anyways in my SSAO shader.

During my geometry pass, where I fill my GBuffer with the current frame's textures, this is how I calculate the normals:

And here is a sample of what the normals look like in the scene: 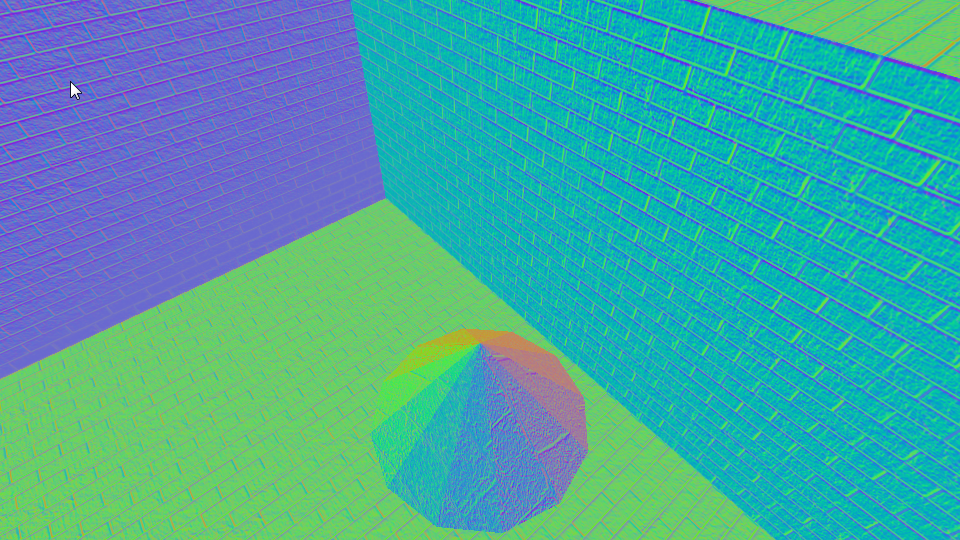 I feel like I'm banging my head against the wall here, I'm not quite sure why I'm getting the results that I am. If anyone wants any further information, I'll post it as soon as I can.

The solution provided in this thread was exactly what I needed. I created an additional GBuffer texture, one which held the scene's normals but in viewspace. I then sent this texture to my ssao shader, and it corrected the issue I was having.

To me it looks very much like your issue here is that you are mixing world and viewspace or something similiar.

Now your GBuffer normals look like they might be in viewspace in that picture, but the code in your geometry pass definitely doesn't transform them from world to view space.

If they are in world space then your NBT matrix is basically oriented incorrectly by exactly the rotation of your view matrix, so your kernel will end up being rotated into or out of the wall depending on where you are looking. And that would give you exactly the result you are seeing.

(Minor sidenote: you are only interested in offset.xy, so after projecting you can just use the two rather than offset.xyz)

Not the answer you're looking for? Browse other questions tagged opengl deferred-rendering normals ssao ambient-occlusion .

14
How do I implement a quaternion based camera?
2
GLSL - skewed parallax occlusion mapping
0
OpenGL Parallax Displacement Mapping Not Working
0
Correctly transforming normals for G-Buffer in Deferred Rendering
0
Moving an object at an angle based on quaternion rotation matrix (c++)
0
convert world to screen coordinates with camera position and camera angle