Rotate Sprite towards another sprite

I'd like to have one sprite to rotate to another point with a constant rotation rate, the sprite should not rotate directly but mor like "rotate more left, rotate more right" 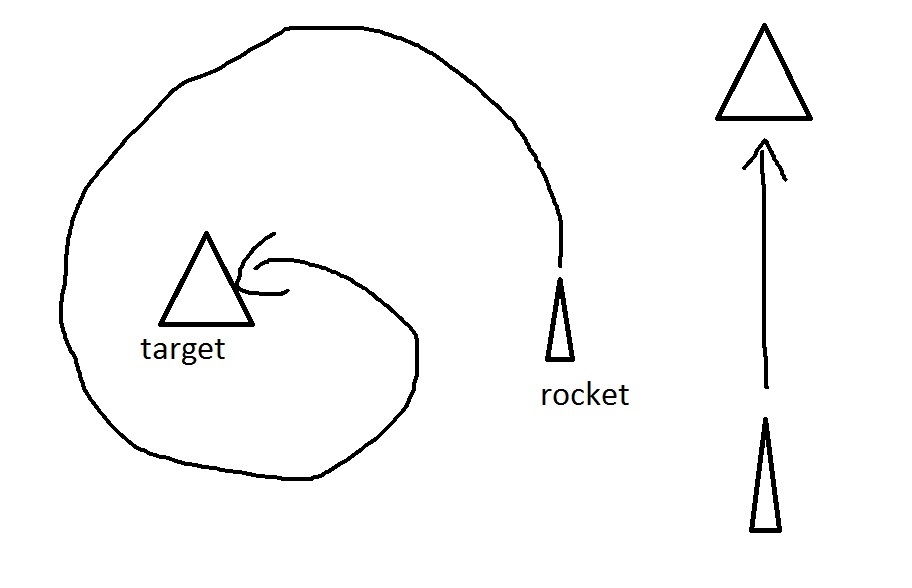 The reason for this is that I want to implement a homing lethargic missile.

Someone knows the math behind this? :)

The steps required are;

If the Sprite class is defined as;

As a side note; you really should look into using some sort of Vector class to represent the coordinates, all of this logic would compress down to a few lines if you had that.

We can achieve this through trigonometry.

then you just type this where you update your object:

I'm not entirely sure I get what you are asking, but here goes.

Mathematically all rotations happen around the origin. So if you want to rotate something around a different point, you'd move it so that the difference from the origin is the same as it would be from that point and then moving it back by the same amount.

Now I think what you are asking is how to rotate one point smoothly so that it ends up on another specific point. Let's call the first point a and the second point b.

You first need to pick a point that has the same distance from both of them. If you are in 2D you can pick any point like this:

In 3D it's slightly more complicated, but you can always find a plane that goes through both points and treat it like it's a 2D problem.

Now if you have your point p that you want to rotate around, you need to figure out the angles here. That's where the atan2 function is super helpful. It tells you the angle that a 2d vector has relative to the positive x axis.

Now you can smoothly rotate from a to b. (Note that you will always rotate counter clockwise if you do this naively, so check if clockwise is faster)

Be advised that you want to figure out how fast to rotate depending on the length of the ark. So you basically want to divide your rotation speed by 2*pi*length(a-p).

Now with all that being said:
If you want to make tracking rockets this is a bad way to go about it.
I think what you actually want is to shoot the tracking rocket in a direction that is slightly off target and let it slowly correct it's path. Potentially allow it to change it's direction faster over time or something. That way your rocket will react much more naturally to for example an enemy spaceship moving after it's been fired instead of looking like it's been glued to an invisible ark attached to the spaceship.

Calculate the angle between the first and the second sprite using trigonometry, then modify the first sprite's angle according to the angle you got.

To calculate the angle between two points, you need to have the distance in the x and y axis between them. x1 and y1 are the positions of the first sprite, x2 and y2 are for the second second sprite:

After you got the angle you just do

BTW.: If you use degrees instead of radians, then always convert the angle to degrees, before you use it. Math.atan2 returns the angle in radians

Not the answer you're looking for? Browse other questions tagged rotation or ask your own question.

16
How do I use the dot product to get an angle between two vectors?

9
Xbox thumbstick used to rotate sprite, basic formula makes it “stick” or feel “sticky” at 90 degree intervals! How do you get smooth rotation?
2
How to set object's / node's absolute rotation correctly?
6
Jittery Movement, Uncontrollably Rotating + Front of Sprite?
2
Rotate to a set degree then reverse and repeat in Unity
4
How to rotate an object along its trajectory path?
0
Rotate sprite direction Cocos2d
1
Unity Rotation - Object is rotating on Z, but should be rotating on X
0
how do I move an object based on rotation of another object?
0
Is it possible to work out rotate in degrees per second based on this rotate logic?