I've started working on a demo for my 2.5D game. For a basic scene I figured I would just use the good old fashioned doom sprites textured to a double sided plane. Simple enough. But I've been scratching my head as to how to display the proper sprite animation relative to the player viewing the sprite...if that makes since.

For example suppose I have three players in the scene Players A, B, and C as such: 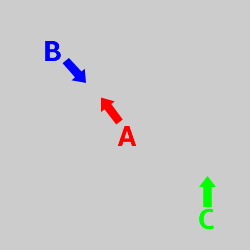 Player C should see player A as: Here's an example of what I think player A should look like from C's perspective:

While player B would see player A as follows:

My current idea is that for any given player, I will need to know the current direction of each other player, and where they are located/moving to relativly. From this, I could calculate which sprite image is required.

Is this correct? What improvements/optimizations could be made?

** EDIT ** Total number of directions will be 8 as depicted below: 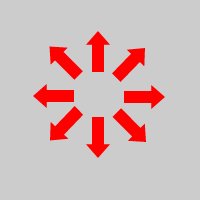 For each direction there are two sprites (to show walking movement, sprites for the right hand directions are mirrors of the left):

** EDIT 2 ** Got this working and have a simple javascript/threejs example for anyone interested: https://github.com/commanderZiltoid/threejs-2.5d-fps

You would need to know the angle to the element from the spectator, so, if you have

You had to add the angles to see the angle of vision (-60deg). that's the rotation of the element, you only have to set the sprite tile that's closer to that rotation angle.

Not the answer you're looking for? Browse other questions tagged animation sprites movement 2.5d or ask your own question.

1
J2ME character animation with multiple sprite sheets
10
How do character/object interaction animations work in isometric games?
0
How powerful is modern hardware for complex, intensive 2D graphics?
1
Animating isometric sprites
1
xna: Methods for having sprite characters in 3d game?
1
How to prevent a sprite to move in an angle that will lead to collision
1
Sprite animation with "overlapping" animations?
0
2D top down 360 degrees rotational movement - stop instant rotation