I'm newer to Unity so bear with me. I'm using Unity2D and so far I have my character up and walking around, colliding properly with his surroundings, and I've implemented an effective "isometric sorting" script which swaps the order of sprites based on their y coordinate. What I'm trying to do now is create a slope that exists in the middle of the stage or front (bottom of screen). I'll illustrate what I'm trying to do as explaining it is bound to be confusing. 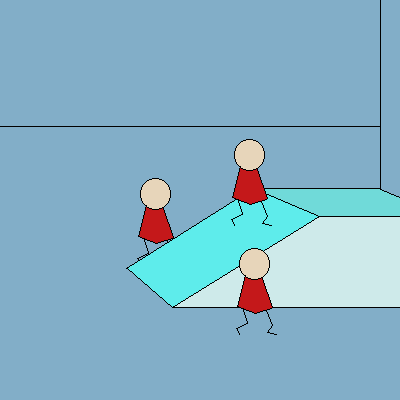 Right now, I have the ability to move the player up the slope, and in front of the slope (using the isometric sorting script), but it seems maybe impossible to also be able to have the player walk behind the slope.

Here's my idea for how this could be accomplished, but I certainly would need some direction. 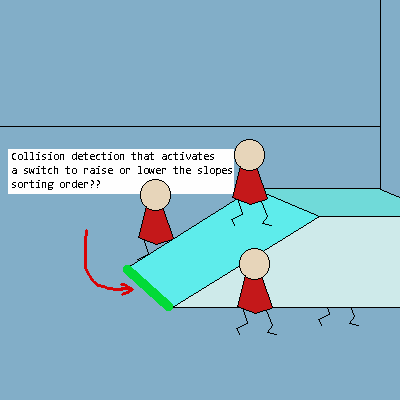 Basically, I'm thinking if I can detect that the player has crossed the green line in the image, I could use that information to flip a switch ON which would lower the slopes sorting priority (thus lowering it beneath the players feet), then I would need it to deactivate when the Player exits the slope.

Here is the Isometric Rendering script:

Thank you to anyone who bothers to take the time to help me! I really appreciate it!

It looks like a wrong approach. Check this tutorial: https://unity3d.com/learn/tutorials/modules/beginner/2d/sorting-layers

In order to sort your stuff properly and automatically you can use depth (z) and/or sorting layers within objects at the same depth and/or order in layer within objects in the same sorting layer. It's probably reasonable to have objects representing fixed features of the game world (like the slope) use fixed depth/layer/order and have objects representing moveable features of the game world (like the characters) use variable depth/layer/order.

Not the answer you're looking for? Browse other questions tagged unity 2d isometric depth or ask your own question.