I've been working on a simple procedural generation class which currently places rooms on a x, y grid and selects a starting room. Each room needs to be connected with passageways so the player will be able to access them. The part that I am having issues with is how to actually connect the rooms.

There's a number of algorithms I've seen online, but I am unsure how to implement most of them.

As for my implementation of placing the rooms, the code tries placing them randomly on the grid until I get the desired density of rooms. After each room is placed, it is added to a list which stores the dimensions of the room. A room is them randomly selected to be the starting room.

Here's an example of the generated dungeons (the room with the "S" is the starting room): 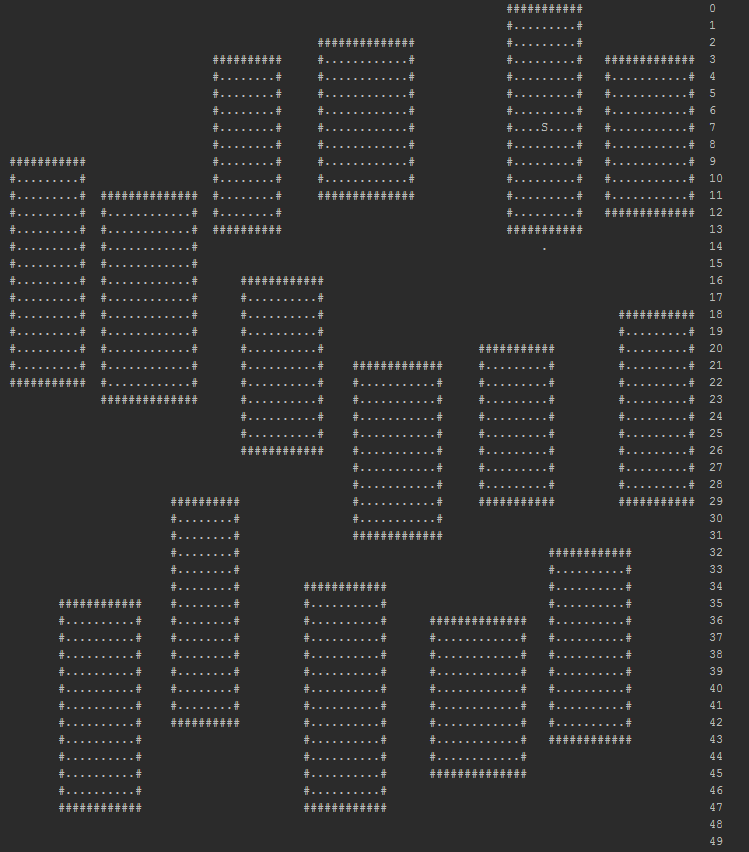 Preferably, the rooms should be connected with their nearest neighbor. I'm not sure what the best way to go about this is.

I would make it little different, i would make a procedural path builder and then spawn floor tiles randomly all over the map, so the rooms will be more "natural created" and them will be linked at least for 1 tile, i can't code in java but i'll code the example in javascript, i think it's clear enough.

I'm going to drop this alternative into the mix. Its one that I really liked and used myself, with some changes.

Roughly speaking the steps are:

It might also be worth making your cell data structure hold informational values, such as "this is a room, this is the wall around a room, this is dead space, this is a hallway, here's a corner, there's where a hallway meets a room (e.g. "door") so that these features can be easily located later, even if functionally a "hallway" cell and a "room" cell are the same thing.

It´s hard without seeing the code, but I think I can give you an asnwer.

I have a very basic implementation of A* (or AStar) algorithm in java, you can use it as a waypoint.

Please, ask if you have any question.

A very neat technique I stumbled upon a long time ago for mapping shortest path for an enemy to take was for an invisible block to be copied along in all directions, not including walls, until it hit your base (This technique was used in a tower-defense game).

To implement this in your game, you could create another character, say &, that would be copied throughout the map from all points on your room. It would be copied such that it would go off into different paths at each point that there was more than one way for it to go. In your case, it will be able to spread however it wants until it hits another room.

Those path would be tracked, and whichever path encountered a room first would thus be the path you use.

If you do end up using this method (highly doubtful considering how long ago this was, but for future readers), make sure that paths do not take all routes possible. Overall this is just food for thought, as it is a highly impractical technique to code on a larger scale, but could work quite well in a smaller game.