Rotating a vector by another vector in shader

I have a terrain surface with a normal for each point on the terrain.

I have a second detail normal map to be applied to the terrain.

I am okay with an approximate solution if it makes it easier/faster to compute. 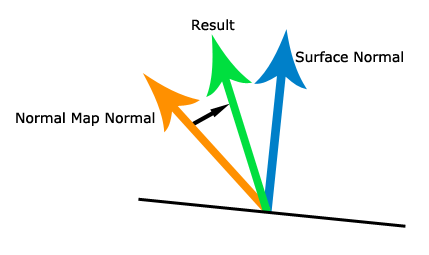 The amount that the orange vector is rotated should be roughly (or if possibly exactly) equal to the angle that the blue normal vector forms with the XZ plane (where Y is up, like the DirectX coordinate system).

Here is a second scenario: 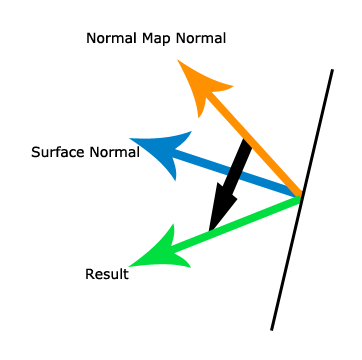 In the above image, the blue surface normal is almost horizontal, so the 2nd normal map is being applied to an almost vertical surface, thus the orange normal map vector is rotated further.

The rotation is being implemented in a HLSL shader.

How do I rotate the 1st orange normal based on the direction of the 2nd blue normal?

Edit: Maybe I need a tangent and bitangent as well as the normal?

Here's how I get the normal:

How might I get the tangent and bitangent vectors then?

Is it enough to take the cross product of the normal with the Z axis unit vector to find the tangent vector? (Since the normal.Y is always positive, where Y is up, and Z is pointing into your screen).

And then take that tangent vector and cross it with the normal to obtain the bitangent?

And then take the normal, tangent and bitangent together to form a rotation matrix to rotate the orange normal map vector?

Even if that works, this seems like a lot of computation for a pixel shader. Does this work, and is there a more efficient way?

This image may help you understand what I'm trying to do: 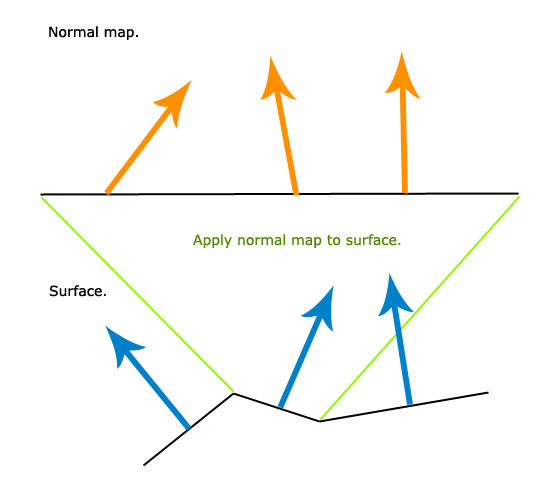 If you know what normal mapping is, then this should be straightforward, I think.

I'm trying to take the normal map, which contains various normals, and apply them to a surface. The surface has it's own normals. The normal map will contain many more normals than the surface, so several normal map normals are sampled across a single part of the surface that has only a single normal.

I think I get your question, although the title and the 2 first pictures are confusing.

Now how can we do that? Bacially we must find the rotation, that rotates the xz-plane to the plane described by the blue normal.

I believe you're over thinking your problem.

So you have a terrain, and a normal map you'd like to apply to it. You've already worked out how to take the delta height and generate a surface normal. You're now looking for the tangent and cotangent.

So what IS a tangent? Well, from the description above, it's actually the 3D direction described by one of the UV axes in your texture mapping. After all, that's what it gets used for, right? So how do you find this direction? Well, given an arbitrary mesh, it's a little tricky; but given a regular grid terrain, it's self evident: if you have a regular grid with regular UVs, then the tangent and cotangent directions are just the two axis aligned edges leaving your vertex.

So, you know what the heights of points around you are. You can pass in how far away these points are on the plane. Subtract those from the point you're on, normalize, and there you go: instant tangent space.

If you do have the tangent also, you can use this function to generate the bumped normal you are after. Otherwise, feel free to plagiarise in future!

You can use the LERP function, this will linearly interpolate between the two vectors. Giving you a nice 'averaged' normal.

(Of course this is not really rotating, but given the orange and blue vector this will get you the green vector)

Not the answer you're looking for? Browse other questions tagged mathematics hlsl vector linear-algebra shaders .

4
2D shader to draw representation of rotating sphere
5
Understanding normal maps on terrain
10
How does normal mapping really work?
3
How to rotate vector A around another vector B?
1
The math of normal mapping without a dot product
2
Proper normal vector transformations in normal mapping
2
How to determine whether the direction of rotating a 2D vector to another one is counter-clockwise or clockwise using the cross product?
0
Check whether a vector is to the left or right of another position
1
Given its direction, and another vector that begins at the same point, how can I find the magnitude of that vector using only vector math?