I made the following flowchart in draw.io. it's just a simple arcade shooter. cardboard zombie pops up, bang, or not. I don't have any official education in game production.

So, are there other chart styles, or UML diagrams that would be better suited for drafting this type of simple game play? 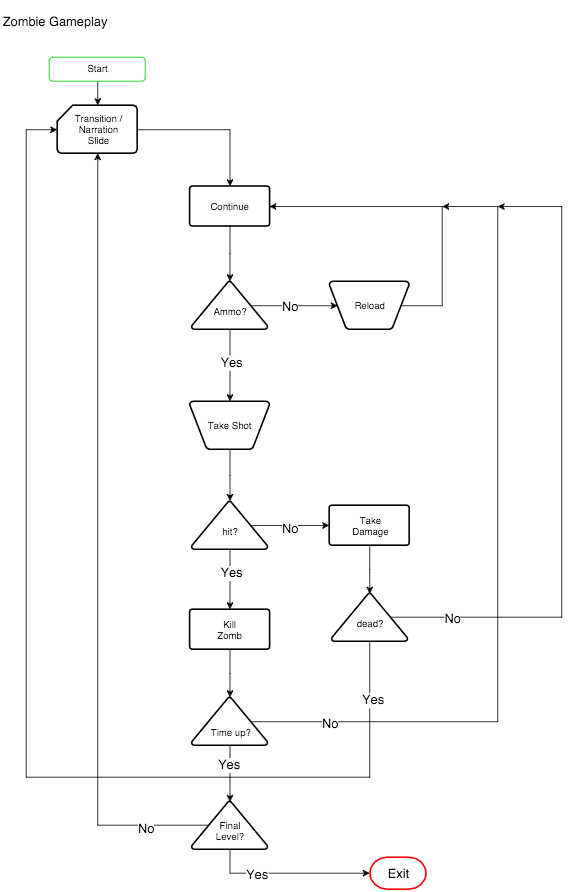 Flowcharts and diagrams are very often used to represent game mechanics or game-play. I would dare to say that most visual assessment of game mechanics are indeed based on some given type of flowchart or diagram.

Now, there is no specific standard on the specifics of what should be represented in such diagrams. But of course there are quite a few suggestions on how to think about game mechanics in an organized manner.

At GDC 2005, there was a presentation called "Game Design Atoms, Can Games Be Diagrammed?" that might be of interest. Later on, Stéphane Bura proposed an elaboration to that use of diagrams in representing games: http://www.stephanebura.com/diagrams/

A great article on that is also Gamasutra's "Game Design Tools for Collaboration". There you will find more on diagram-based approaches, the suggestion of using tokens, a quick summary of Daniel Cook's Game Alchemy for Skill Atoms that was already suggested in the comments, and also some mention to a more recent interesting paper called "MDA: A Formal Approach to Game Design and Game Research", that is surely worth reading.

Lastly, if you don't know of it yet, there is a very nice paid software that allows for integrated story-telling, preparation of game-play diagrams and so on: Articy:draft2. While it is paid, there is a trial version available. Its trailer can be seem in youtube at https://www.youtube.com/watch?v=JaKkHHjVPtU.

4
How to do an infinite torus topology battlefield for over-the-shoulder perspective
8
GamePlay Patent
2
Art style - setting - gameplay
0
What is the better way to speed up gameplay as the level rises?
3
What would a good hacking gameplay look/feel like?
1
Categorizing Projectiles in an arcade shooter (multiple inheritance?)
0
Reduce Blur and headache during gameplay
0
Different gameplay throughout game?