I am developing a 3d sweep and prune module for a project, and it is producing false positives.

The pair generation code is as follows:

Where each object has a unique ID in the world. This works fine with small objects, but I have encountered a problem, where, If the ground is represented by a finite (albiet large) axis aligned plane, false positives and negatives are generated, preventing the Narrow-phase from doing it's job.

As you can see, each axis list is traversed in sets of 2 elements, and the unique ID's are compared. If they do not match, then a pair is generated for that axis.

Even if A and B are far away from one another on the axis in question, the pair is still generated. Additionally, If there is a genuine overlap on that axis, eg. Pmin, Amin, Bmin, Bmax, Amax, Pmax, then genuine intersections are missed.

Also, I've just encountered another problem: Even when traversing the lists one element at a time, In the case of objects stacked on an axis, collisions can be missed. The following image illustrates this: 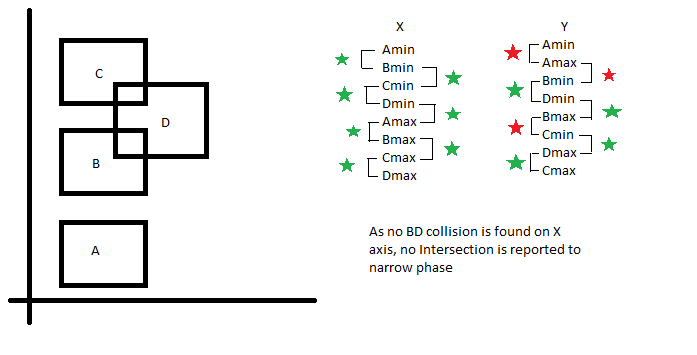 If anyone else has encountered this problem, I'd like to hear how they solved it.

I came up with a solution:

In order to record all possible intersections on a given axis, You must record a pair for every possible overlap. The code I posted wasn't doing this. Instead, my new code traverses the the list one at a time, and for each endpoint which is marked as a minimum, search the remaining elements until you find the max endpoint for the same object and generate a pair for all elements in between:

As each object has only two endpoints, min and max, once you reach it, it can be inferred that the other end point is the maximum extent, therefore beyond it, no further intersections are possible, and so no further traversing is necessary. Naturally, this does increase complexity, but as the checks are very simple integer/integer, and boolean checks, It shouldn't have too much of an impact on performance.

Not the answer you're looking for? Browse other questions tagged c++ collision-detection algorithm or ask your own question.

0
Sweep and Prune vs Quad Tree
14
How can I optimize a collision engine where order is significant and collision is conditional based on object group?
6
Sweep and prune vs quad tree when all objects are dynamic (moving)
15
Flowing GPU compute water
12
How to solve the ground check problem?
0
My sweep and prune is giving false positives
0
Why does this implementation of sweep and prune freeze, and how can I fix it?