This is a fairly complex question, so please bear with me.

I'm attempting to calculate an edge loop based on the intersection of a plane with a mesh, bounded by a sphere. 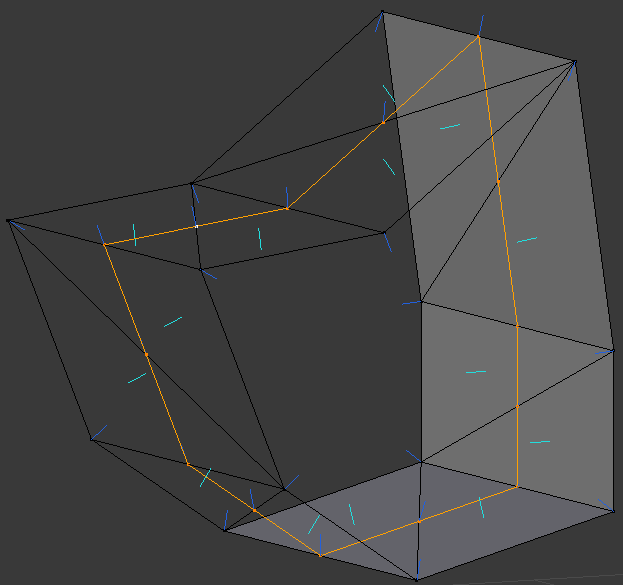 The black lines represent the intersected mesh, the orange line the result. Blue and cyan lines are vertex and face normals, respectively. The sphere origin would be somewhere inside the mesh. The orange vertices and sphere origin would also be coincident with the plane. Note that the edge loop is not part of the mesh. This is not a mesh split - just a list of vertices forming a loop along it.

Faces included in the edge should be pointed toward the sphere origin side, and any islands should be ignored (greedy), as shown in this mock up: 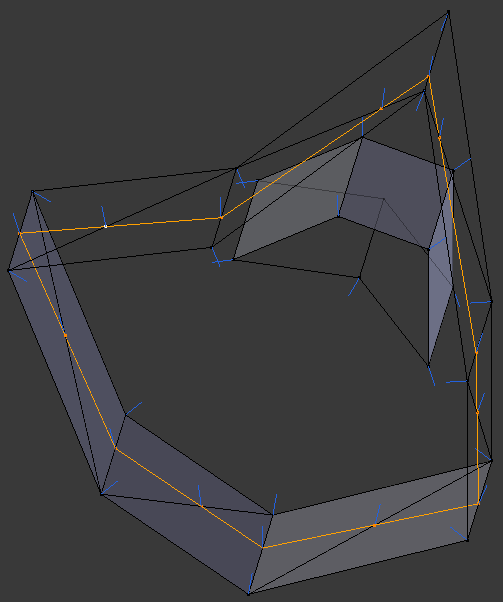 In the event that a closed loop cannot be found, the function should return null or an empty array.

I'm working on this in Unity, so I will use its API to further illustrate. The signature I expect to use looks like this:

I've tried a few different approaches, but I'm now leaning toward a more brutal approach. To come up with those mockups I simply used Blender's knife tool, duplicated the edge loop, and then dissolved the edges on the mesh. If I could calculate an edge loop for every face intersecting the plane then project the edges and origin into 2D space using the plane, it simply becomes a problem of finding the outermost loop containing the origin, which is itself contained by the circle.

I found this paper, Fast Algorithm To Split And Reconstruct Triangular Meshes, which also uses planes for splitting, but seems to integrate the vertices into the mesh as it goes - whereas I just want the resulting edge loops. Though it's entirely possible I'm reading it wrong.

Unity uses indexed meshes which will help (as long they are indexed properly and clean).

This gives you 1 ordered loop. Repeat with all the unscanned triangles to find all the loops.

Ignore the loops inside other loops using a 2D Point-In-Poly test projected on the cutting plane.

You may still end up with 2 or more loops. For example think of the ways you can slice a donut: You can get two loops outside of one another.

4
Determining which edge of a box was clicked in Unity
4
How can I find the "end" vertices on an open-ended mesh?
2
How can I add solid collideable borders to the viewport regardless of the resolution?
2
Unity: Import a mesh that only has vertex and edge data but no faces
0
Why is my spherecast returning an incorrect hit on mesh collider?
0
LineRenderer on Mesh surface
1
Is there a way to specify normals as per-face instead of per-vertex in Unity?
1
My vertex cache for reusing vertices in marching cubes algorithm in unity fails for one case, but I cant figure out what case
1
Mesh seams visible in Unity