I'm attempting to develop a multi-platform turn-based game that [I suspect] follows the general client-server pattern. For this question, let's assume I only care about communications inside of a "battle" right now.

Here are the relevant mechanics of a battle: there are some number of "soldiers" in each battle. Each soldier is under the control of a player and a player may be in control of multiple soldiers in a given battle. Each turn only 1 soldier makes an action, the server will contain logic to determine which soldier that is. There are no time limits on turns. The player in control of that soldier select an action for that soldier which is sent to the server. The server will then determine the result of that action and send that information to every client.

This diagram can hopefully show my intended flow of information: 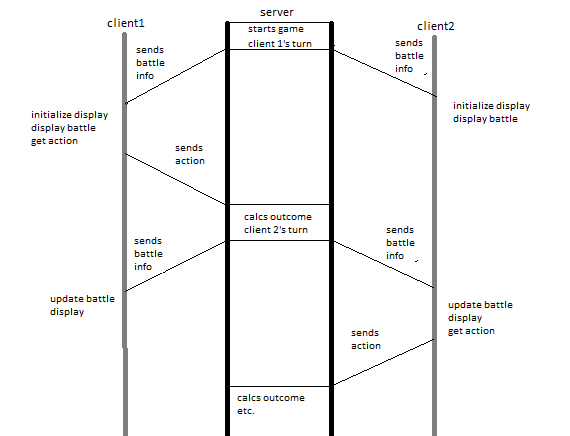 Unfortunately, I'm not quite sure how I would go about implementing this.

An approach that I would know how to implement that mimics this behavior would be to have each client HTTP GET a turn number from the server at a regular interval of ~3 seconds. If the turn number matches the client's data it does nothing until asking the server again in 3 seconds. If the number doesn't match, then the client HTTP GETs new battle data from the server and uses that to update its display. On client to server communication I'd send a HTTP POST request.

How would I clean this up - or - how could I implement it as in the diagram?

Using simple AJAX polling I think you've come up with the best solution, with the exception that a client doesn't need to be in a polling state while it is their turn. This reduces some of the polling. I also think you can reduce the frequency of polling to 5 or even 10 seconds since someone waiting for their turn won't know when exactly the other player finished their turn. You could also perform an incremental system where you poll ever 3 seconds until 15 seconds have passed, and then slow down, under the assumption that you are not in a rapid pace state of the game, so neither player will care for or require really responsive turn-taking.

Otherwise you want to investigate some kind of push notification. Here are some links to other questions:

And some other information:

Not the answer you're looking for? Browse other questions tagged networking client-server turn-based http .

5
Optimal data size for a 3G client-server game?
5
Reliability and suitability of 3G connection for client-server turn-based non-asynchronous game
15
Is there a pattern for writing a turn-based server communicating with n clients over sockets?
1
Communication between Photon Cloud game and web server
0
Let both clients know of complete game-state in turn-based game?
3
Multiplayer game, design of server <-> client communication
2
Turn Based Game - Best approach for Server communication. TCP/IP or REST API?
1
Is it necessary to use HTTPS for mobile game communication with server?
1
Network mechanism for an RTS multiplayer game