Lazy way to figure out the two sides of a border?

We have a 3d model. There is a simple path on that model's surface graph G of the form: 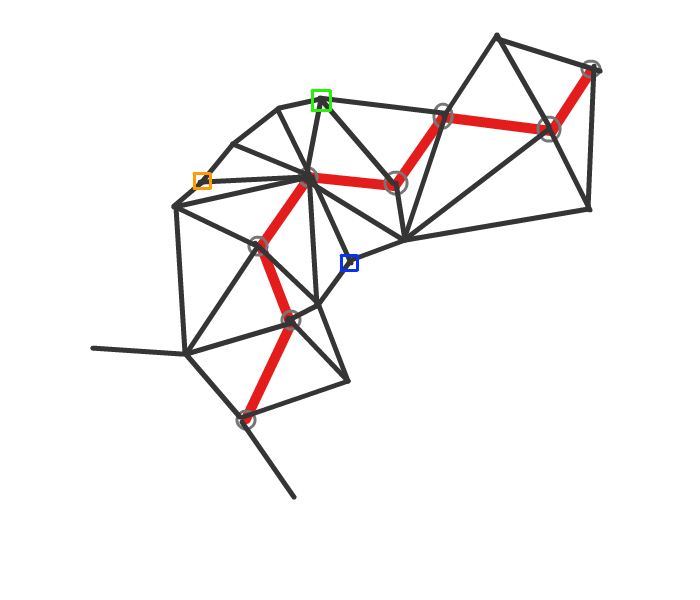 My intuition is that you Dijkstra the shortest path between them and if it goes through the trail an even number of times their on the same side. However that is not defined if you don't know what goes through the trail computes to. If thinking if it was 2d and we could project these trail edges on some flat surface this would be made trivial.

My current solution is a lie. Each edge is normally shared by two faces unless it's an orbifold which is currently not interesting to this question's input population set. Also, in our world, each face has percisely three vertices.

Here is one fault in this solution: 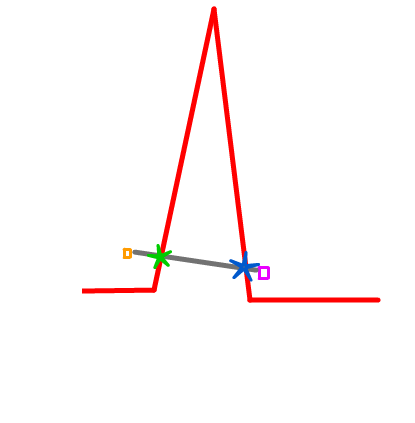 Sometimes the two are on the same side and the other route is shorter.

This is a clarification inspired by wondra that felt nothing can be on the right side or the left side of a trail, something that in my opinion people would disagree with as we have a good sense of left & right.

Lets "split" the model where the trail is and add more faces between the two new trails (lips) and get something like this:

Trail 1 is Blue, trail 2 Red and some epsilon wide faces between them. Now we use Dijkstra to find the shortest distance from both trails (Blue and Red). Some vertices are closer to the Red, some to Blue. Very few are (the same), closest simply to the last or first vertex in the original trail that are conjoined between the trails. 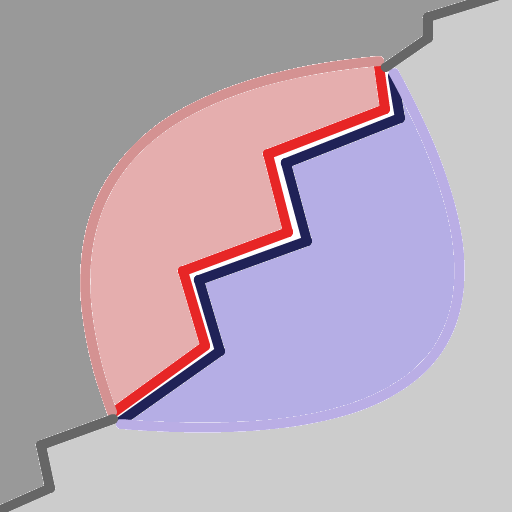 I believe the solution is simple - mark vertices of the path as impassible and run regular Dijkstra for this input. If it fails to find a path you are sure they are on different sides.
Edit: If your path does not split the graph into two components you can still use method described above with only difference - after finding the shortest route check whether it contains endpoints of the path. If it contains exactly one endpoint, you know the points lies on different sides (if it contains both of them, you know it went "the other way around", in example given in question it would take the bottom path, points still can be assumed on same side).

You might point out now: "But unsuccessful Dijkstra will visit every vertex of the component!". Yes that is correct, and there can be no other way - imagine the example given in answer what if there was not just the spike but whole labyrinth? Running full Dijkstra is necessary if you need 100% correct answer (OP found in solution it will give you only "maybe" answers otherwise).
If the speed proves to be problem, and you are confident that the path is "simple enough" you can speed the process up by giving up early, after n steps this should give better results with A* instead of plain Dijkstra. Alternatively, you can do (offline) pre-computation by giving each vertex its component ID using flood fill, this is way fastest solution(for answer just compare component IDs), but also the least flexible one.

5
Find sub-graphs in a graph
2
Blender: How to merge two faces?
4
What is the issue with my model rendering from .obj files?
11
Determine if a set of tiles on a grid forms an enclosed shape
0
Path smoothing while path following
2
Voronoi / Delaunay Graph - Triangle Circumcenter error
3
How to choose and scale heuristics for A-star on a graph?
6
How to randomly create a fair maze for a multiplayer game?