the sphere diameter is 32 and sits on the xyz = 0 position;

when rendering using indexedprimitive all appears fine. the sphere appears in front of the plane.

as if the plane were moving down over the sphere but only displaying the parts of the sphere that should be hidden.

the most puzzling aspect is that this problem only appears as one object passes through the other. when behind it is hidden, when in front visible?

Has been suggested I upload a sequence of pics to better illustrate my problem so... Hope these help

All thanks to DMGregory for showing me the way.

Because I was using an Orthographic view and looking straight down at objects directly facing me with NO rotation I fell foul of a really old optical illusion. I was indeed looking at the inside of my objects but my brain didn`t realise this so interpreted the visual info as facing out. Doh!

I only clear the DepthBuffer and NOT the Target (The texture) as before setting the graphicsDevice here I use the SpriteBatch to Draw a texture onto the RenderTarget2D that I use to build the full image. This worked beautifully and allowed me to create the following character :D 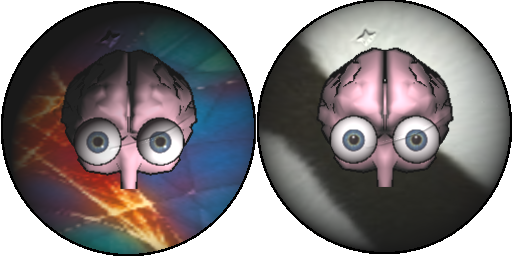 Not the answer you're looking for? Browse other questions tagged c# xna 3d graphic-effects or ask your own question.