What is an OO way for my input layer to act upon objects?

I'm building a top-down RPG specifically to practice Object Oriented thinking and design. I am keeping in mind coupling, single-responsibility, and so forth. One design issue that's been bugging me is how to ultimately have objects talk while maintaining the loosest coupling possible. As an example, I'm designing the input class now, which will be made up of two layers, like so: 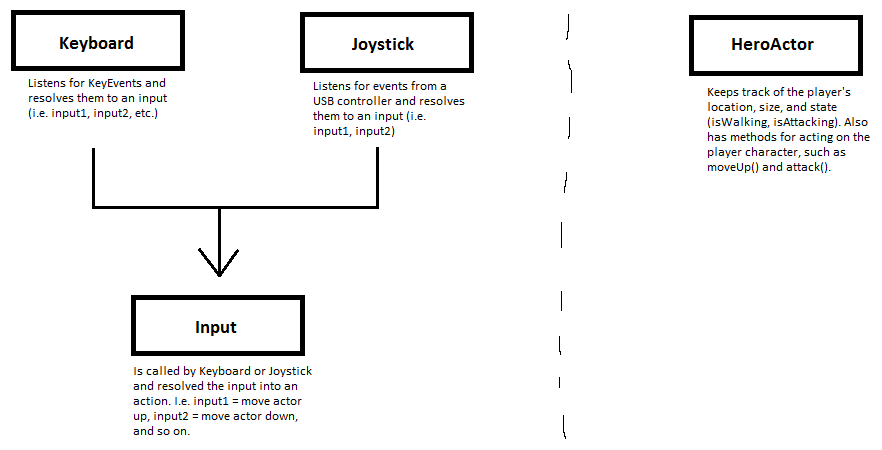 The conundrum is that I don't know how to bridge that gap between Input and HeroActor, which is initialized from the PlayState class, which is also where the hero.update() method is called. Let's say Keyboard has just executed

My ideas have been:

I'm in the same situation trying to figure out how to write the collision engine without passing it specific references to the player's HeroActor instance or the dozens of EnemyActor instances in the PlayState constructor.

Any help would be greatly appreciated. My request is not for specific code, but rather common techniques for handling the many objects in a game without ending up with a god object. I've seen some material suggesting an Observer pattern being applied for things like the input layer above, but before I go too far, I'd like some feedback from the community since I've got so many different answers among all of my Googling today.

You are right that directly coupling input handlers with actors introduces messy situations: for example, what happens if the actor dies - do you add alive checks in your input handler, or do you go through all your input handlers and invalidate their actor references? What if you are in a different context, like a modal menu?

I'm reminded of the MVC pattern which deals with a similar problem: by introducing an intermediary controller between the models (your actors) and views (your input handlers), you can interchange different views and models without affecting the other, and you get a lot of flexibility. Therefore I think you should have some intermediary between your input handlers and actors.

A common solution is to, yes, use the Observer pattern. One of your actors and input handlers agree to observe/notify on a common subject: movements for player number 1, so any time the input handler notifies about player 1 movement, the observing actor will move in reaction. The neat thing about this little bit of indirection is the flexibility you get:

11
Nested input in an event-driven system
1
What is the best way to funnel input to the correct entities?
4
How would I handle input with a Game Component?
1
What is an acceptable input delay?
1
Design question: How to handle input more efficiently?
5
What are reasons for input polling vs. input events?
3
What is the proper way to process joystick input?
2
What should be an entity/component, and what shouldn't?