I have this problem, which isn't really a problem, but I feel like it's some sort of glitch in my code maybe.

My pathfinder, to find a path from A to B, does this: 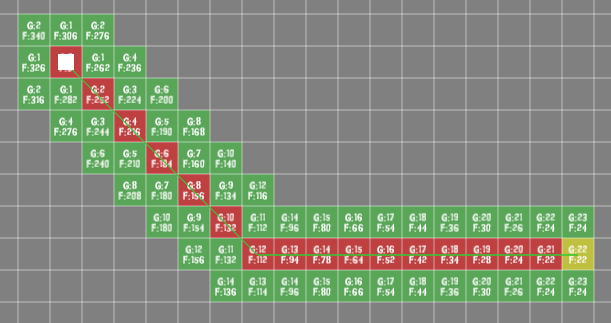 which is almost fine, it works great, but others I have seen do this:

tested with all of these and more (that got removed), and all produce the same/similar results:

(Manhattan, Euclidean, MaxDXDY, Diagonal) can't post more than 2 links, but I tried all of those + more

So I really think at this point it's to do with my algorithm code, could anybody see any problems?:

There is nothing wrong with your algorithm, it finds the shortest path. Want you want you can do with a extra step after your path is found. Usually its called something like 'SmoothPath'

here's a link with pictures: http://deepnight.net/bresenham-magic-raycasting-line-of-sight-pathfinding/

This answer sort of tries to solve the question in a different way than you ask, but is useful in the context of games development, especially since your code appears to be working and finding a short path.

Is there any place you store X & Y coordinates in nodes ? because you could apply interpolation by using a catmull rom spline by taking all the points and lerping them to make a more natural route human like route.

http://gamesnorthwest.net/resources/modules/co2301/materials.html -- < if you check week 12 there is an example program in a engine called TL(its visual studio 2013 modification using DirectX9/10) , its C++ but you can use the lecture notes and formula in the program to apply it.

Not the answer you're looking for? Browse other questions tagged c# xna monogame path-finding or ask your own question.

11
Situational awareness in path finding
25
Path finding algorithms?
3
Walk to nearest attackable range node
2
Overlaying grid for pathfinding
9
Building an Octree for terrain generation
2
Pathfinding on multiple grids connected through teleports
1
How to completely stop the camera from clipping into the ground
1
A* heuristic for use with Goal Oriented Action Planner
0
3D A* Pathfinding Algorithm Help