I have added a rope to my game that is made up of multiple small gameobjects, each connected to eachother by a HingeJoint2D. Since 1 unit of mass in Unity is supposed to represent 1 kg, I've made the player's mass 60 (60kg). When the mass of each rope segment (of which there are 40) is 20, the rope supports the player when they jump off a cliff. 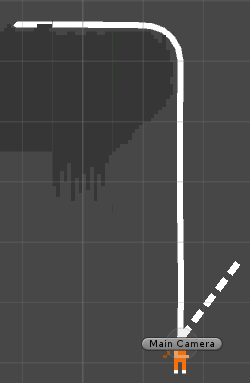 Now 20 kg per rope segment sounds ludicrous. However when I make each rope segment weigh 1 (1kg) the hingejoints break completely and jitter around crazily. The force of the 60kg player against the 1kg segments seems to be too much.

I would much rather have the rope be lighter, so it doesn't move the player when throwing and being dragged as much. Any suggestions on how to fix HingeJoint2D's and make them act, as you know, a joint should?

EDIT: Increasing the Position and Velocity Iterations in File->Project->Physics2D menu from the default 3 and 9 respectively, up to a whopping 40 fixes this problem. This is a massive increase. Unsure if performance will suffer too much with these new settings.

Yes, they do; all joints do. And there is no (realistic) solution as fas as i know.

I read somewhere in documentation that says two objects connected with a joint should have close masses. It's too weird, actually.

I encourage you to use good old parent-child technique; never breaks, never acts oddly, and never extends (or reverse) like your second image.

1
How do I interpolate air drag with a variable time step?
3
Physics system imploding under force
0
Unity 2D Current object force
2
Unity - Joint tearing under larger force
3
2D grid based placement (limited to 1 tile in each direction) in Unity
1
Unity rope/cable physics / anchor points
1
Why does my Unity/Android game get a small amount of lag when not being touched for some time?
0
Implementing tension in chain/rope pulling