In Unity 5, I have a player shooting a projectile in aim to hit a boss, and inflict damage upon contact with the projectile. Though for some reason, the projectile and boss aren't colliding with each other.

However, none of these seem to be working.
This is the boss' health script:

Here is the projectile prefab: 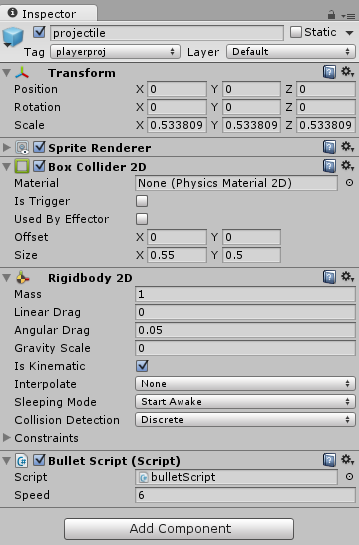 And the boss prefab: 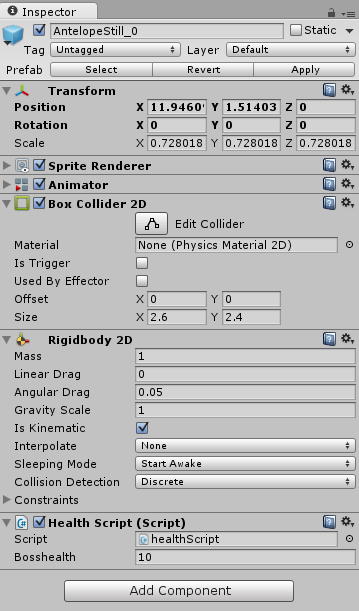 Does anyone have a clue as to why they're not colliding? the projectile just glides over the boss

EDIT: I found a temporary fix! Disabling the Kinematics of the boss allows for both objects to collide, and successfully display a debug message! Just a problem though; I don't want the boss to freely float around in space. I use the kinematic to ensure it stays put at all times until told to by scripts.

Is there a way to get around not having to disable the kinematics?

EDIT 2: Then again, I am removing the projectiles on impact anyway, so the actual boss doesn't move, but that seems dirty :/

Thanks to @DMGregory for enlightening me on this.

It turns out that you can't collide objects that both have "Is Kinematic" enabled. To get around this personally, I just unchecked "Is Kinematic" from the projectile and set it's gravity to 0, so it doesn't fly down.

Not the answer you're looking for? Browse other questions tagged unity 2d collision-detection rigidbody or ask your own question.