How to prevent accelerating along wall during 2d sliding collision response

I'm writing a simple 2d physics system using a circle colliding with edges. When the user presses a key the circle's velocity is incremented by some amount in the direction they pressed. There is currently no friction, although that shouldn't be relevant (for example if a character is jumping there's often no friction until landing but walls should still work correctly). There is also a limit to the magnitude of the velocity vector. 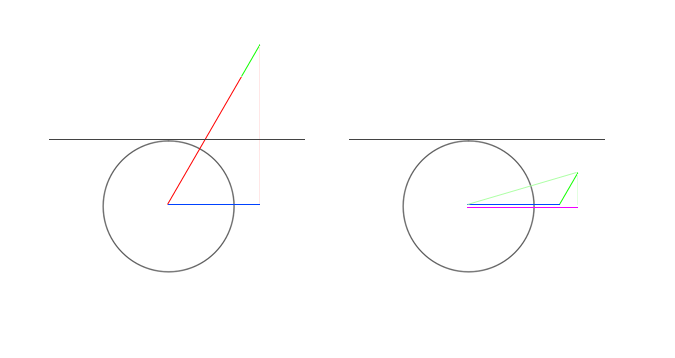 On the right is the second iteration where the same green vector as before is added to the current velocity (the same projected velocity from the first iteration), and this resultant vector is projected along the surface to produce the new purple velocity vector.

As you can see the purple vector is larger than the blue one meaning that the circle is moving faster on the second iteration than the first and therefore is accelerating along the wall. The character will continue to accelerate on consecutive iterations along the wall until reaching the maximum speed.

I understand why this happens, however I'm struggling to figure out how to change the logic so that it'll behave in the way games typically handle this. Typically characters accelerate more slowly and have a smaller apparent speed cap the more perpendicular they are moving relative to the wall's surface.

What you could do is have a maximum velocity which scales depending on the angle with which the player attempts to move 'into' the wall,

where player_input is the vector for the acceleration added by the player,wall vector is the vector parallel to the wall and dot is the dot product of the two vectors.

In similar way you could limit the acceleration of the player by multiplying by dot(player_input, wall_vector) achieving the result you desire.

Edit: As the comments have mentioned this behaviour is not entirely physical but it will 'appear' to behaviour better as per your requests.

Not the answer you're looking for? Browse other questions tagged physics collision-resolution character .

15
How do I calculate rotation caused by bounce friction?
9
How to implement friction in a physics engine based on "Advanced Character Physics"
4
Friction due to gravity in an impulse based physics engine
2
Implementing collision response, current implementation does too many checks
1
AABB swept collision response with voxel world
2
Using Farseer Physics, how can I get objects to bounce at the correct angle
2
Sliding DOOM style collision resolution against arbitrary 2D geometry
1
Prevent camera from moving through walls (no engine or framework)
2
Unity RigidBody not rebounding as expected on low-impact collisions